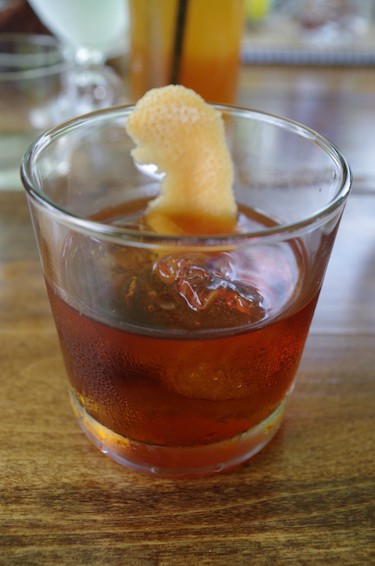 The Old Fashioned cocktail is said to have originated in Louisville, Kentucky’s Pendennis Club.  There are many variations of the story, but the basic story is this: bar patrons would often order cocktails made “in the old-fashioned way,” and the name just sort of stuck.

“Although some say it is an adaptation from another cocktail- perhaps the Whiskey Cobbler or the Whiskey Cocktail- others argue that it is the original cocktail. . . That’s not bad for a drink that most sources say originated in the Bluegrass State,” says Albert Schmid’s The Old Fashioned

The cocktail is simple enough- bourbon, of course, a sugar cube or simple syrup, bitters, a flamed orange peel, and a cherry.  There are as many variations of The Old Fashioned as there are bartenders, of course.  Some muddle fruit at the bottom and stir in the rest of the ingredients with ice.  Others skip the muddling, allowing the flamed orange peel to lend all the fruity notes to the cocktail.  Still others substitute rye for the bourbon, and some use flavored whiskeys such as maple.

Then there are the bitters- there are as many different types of bitters as there are people in the bourbon industry, and some bartenders even make their own.

The Old Fashioned is such an integral part of Louisville’s bourbon culture and heritage, the mayor recently dubbed it the “Official Cocktail of Louisville.”  Most stops on The Urban Bourbon Trail will feature their own variations.  Here’s my official variation:

Flamed orange peel, squeezed and dropped in the glass

Combine all ingredients in a rocks glass filled with ice and stir.