Ohio’s Gervasi Vineyard Offers Up Some Bourbons With Cask Finishes

Gervasi Vineyard out of Ohio, though its Gervasi Spirits line, recently announced it created a series of bourbons with different cask finishes, including a unique wine barrel bourbon finished in a red wine barrel.

According to Gervasi, the distillery team wanted to create “distinctive products” while respecting the longstanding tradition of bourbon. 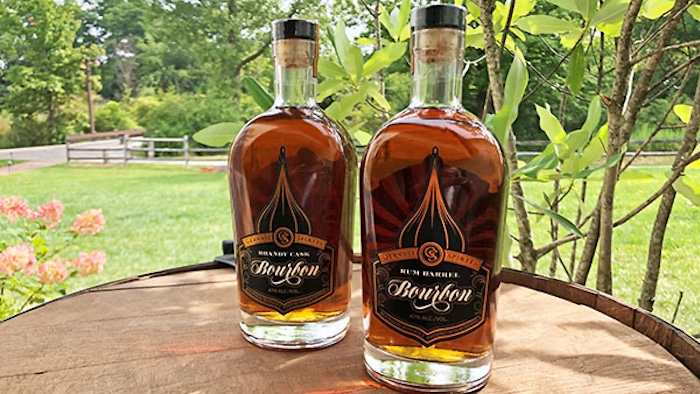 “Since opening the Still House and distillery in 2018 and releasing our craft products, we have seen an affinity in our customers for new experiences,” Andrew Codispoti, Director of Winemaking and Distilling, said in a prepared statement. “Building on the unparalleled popularity of bourbon, we elected to further broaden our offerings in this category to meet this increasing demand.”

For the wine barrel bourbon, the winery/distillery took one of its bourbons and finished it in one of their own red wine barrels. It is said one should taste from it “notes of sweetness and spice with elegant grain and barrel tones.”

Codispoti added he also saw an opportunity to create “a ‘marriage’ between bourbon and the legacy innuendos of rum and cognac as gleaned from their aging casks.”

“Freshly emptied South American rum barrels became available at the perfect moment fo the project launch. At the same time, cognac casks from France also lit up our screens,” he said. “We seized the opportunity and kicked off the project with both barrels in mid-2019.”

The rum barrels gave the bourbon aromas of dark fruit, caramelized sugar and deep spice notes, while the cognac casks offered fruit and undertones of spice.  A four-year-old bourbon with a high rye component was chosen for this treatment.

These spirits became available recently directly through the winery/distillery.

25
Shares
2.2k
Views
Share on FacebookShare on TwitterGet Our Newsletter
Read More Whiskey News
Laws Whiskey House Has A New Limited Edition Ruby Port Finished Bourbon
Cheers to the Dads! Personalize a bottle of his favorite whiskey to create a modern gift for the modern man. Use code: FATHERSDAY20 for $20 off your next order of $100 or more at ReserveBar