Diageo’s Orphan Barrel whiskey series, as we’ve seen over the years, is all about moving older barrels of brown spirit sitting around various aging warehouses in the spirit giant’s vast booze empire. Back in 2016 this took the form of Whoop & Holler, a 28 year old Tennessee whiskey drawn from George Dickel stock that left a fair amount to be desired when we reviewed it. Now a new bottling is out, known as Copper Tongue, that aims to hopefully provide a better tasting experience.

The new Orphan Barrel Copper Tongue, according to those behind it, is a 16 year old Tennessee whiskey from the Dickel (Cascade Hollow Distilling Co.) distillery that is a first in the Orphan Barrel line up for a couple of reasons. First off, it is described as being the first cask strength straight bourbon from the brand. Second, and perhaps much more important, is this is the first since the Dickel inventory was put under control of General Manager and Distiller Nicole Austin. Austin, as has been observed in her brief time there, has quite a knack for picking out winners for bottling. 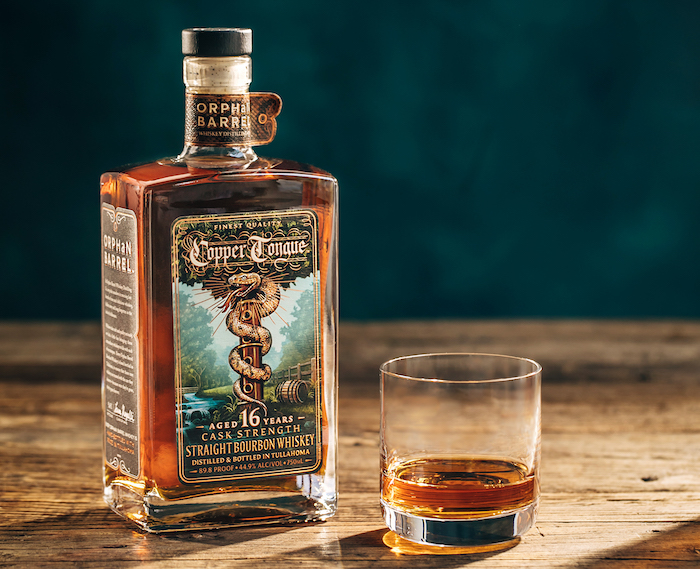 It is said of Copper Tongue by the brand that the stocks for it were discovered by Austin “in Cascade Hollow Distilling Co.’s single story rickhouses. These rickhouses draw inspiration from traditional Scottish barrel storage and are a rather unique feature in the U.S. that helped impart a special character onto the liquid. On the other hand, Tullahoma is a part of each whisky produced at Cascade Hollow Distilling Co.

“From using the Cascade Spring water that runs through ancient limestone to the distillery working with local farmers, Copper Tongue is also distinctly inspired by American traditions.”

“Since joining the team at Cascade Hollow Distilling Co., I’ve loved getting to explore all the incredible whiskies produced at the distillery. In that process, I’ve been excited to have found such an amazing whiskey to give a home to,” said Austin in a prepared statement. “Orphan Barrel Copper Tongue brings together traditions from both American and Scotch whiskeys, and the result is a sophisticated straight bourbon that’s surprisingly delicate.

“With this release, I can’t wait to share this rare whiskey with the world and showcase a bit of the magic that can comes from Cascade Hollow.”

Plans call for Orphan Barrel Copper Tongue to be a somewhat limited release, bottled at 89.8 proof (44.9% ABV) and priced at $100 per 750 ml bottle. It will come to retail in June, and you can find some official tasting notes for it below.

Shares
1.4k
Views
Share on FacebookShare on TwitterGet Our Newsletter
Cheers to the Dads! Personalize a bottle of his favorite whiskey to create a modern gift for the modern man. Use code: FATHERSDAY20 for $20 off your next order of $100 or more at ReserveBar