New Riff Distilling, located in the northern part of Kentucky, likes to focus its whiskeys being made in what is described as “the traditional, time-honored sour mash Kentucky regimen, which utilizes a portion of grain ‘backset’ from a previous distillation in the mash of the new batch.” The rub for them in this via their newest releases is that they used “backset from a distillation of peat-smoked malted barley and rye,” producing a “new riff on an old tradition.”

The new New Riff Backsetter Bourbon and Rye whiskeys, according to those behind them, have mash bills of 65% corn/30% rye/5% malted barley and 95% rye/5% malted barley, respectively. The previously mentioned sour mash technique, in influencing these expressions, “allows one recipe to inform the flavor of another.” With the peat-smoked influence, it is lending a “a smoky cast to the whiskeys.” 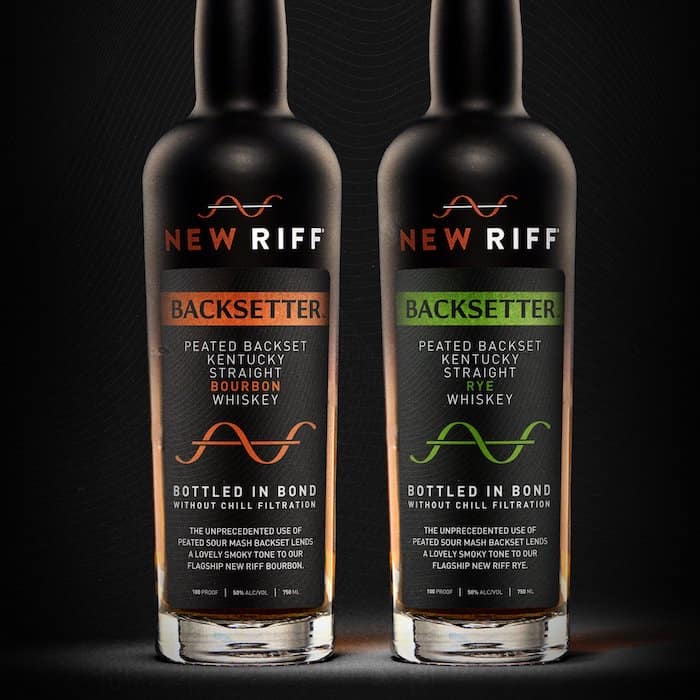 “They’re hauntingly unique,” said New Riff co-founder Jay Erisman in a prepared statement, “with layers of peat enveloping the spicy, rich rye and bourbon. It’s a small hint at the flavors developing in our warehouses — and a great reflection of how New Riff marries a commitment to tradition with a love of experimentation.”

Both the New Riff Backsetter Bourbon and Rye are bottled-in-bond without chill filtration and aged at least four years. They price around $50 each and are available in limited quantities. As for official tasting notes, you’ll find those below from the distillery.

New Riff Backsetter Bourbon has a rich, oaky nose at the forefront but with water opens to a broad field of grain and rye spice against a smoldering backdrop. The palate is remarkably soft-textured with the peat more immediate than on the nose. Juicy and zesty, a spicy rye top note at midpalate is joined by smoke, oak, sweet corn and grassy rye. The finish pings between smoky peat and a peppery-clove rye note.

Meanwhile, New Riff Backsetter Rye shows considerable peat at the front of the nose with hints of fruit and grassy rye, but a splash of water opens the bouquet and the peat retreats into top notes of grassy rye and subtle cinnamon spice. Medium- to full-bodied on the palate, rounded and chewy — and with quite a bit of peat that even Islay would be proud of — the Backsetter Rye’s midpalate of sugared fruit and cinnamon-allspice heads to a finish of wafting smoke and rye spice with notes of Thai long black pepper and grain of paradise.