New Partnership With Buffalo Trace On One Of The First-Ever Private Purchases Of An E.H. Taylor Barrel

Editor’s Note: A previous version of this story indicated this was the first ever private purchase of an E.H. Taylor barrel. It is, in fact, one of the first ever purchases (previous ones have already happened). We’ve corrected this story to reflect that.

This past year, Society Awards was able to select a private barrel of E.H. Taylor, one of Buffalo Trace’s most sought after whiskeys. And why is that important? This is said to be the one of the first ever “private purchases” of an E.H. Taylor barrel.

This is not, however, the first project of this kind for Society Awards and Buffalo Trace. What is Society Awards you ask? It’s the designer and manufacturer of luxury, custom and limited-edition awards. You know, little statues. But not just any. Some of the most famous, prestigious and televised awards in the country, such as NATAS Emmy, Academy of Country Music, Billboard, MTV, YouTube Creator Awards, NAACP, NBC’s The Voice, American Music Awards, BET, CFDA, ABC’s Dancing with the Stars, the Recording Academy, and many others.

Previously, Society Awards partnered with Buffalo Trace by buying a barrel of 10-year-old Eagle Rare bourbon for the awards company’s 10-year anniversary in 2017. That barrel was bottled and gifted to Society Awards’ clients. 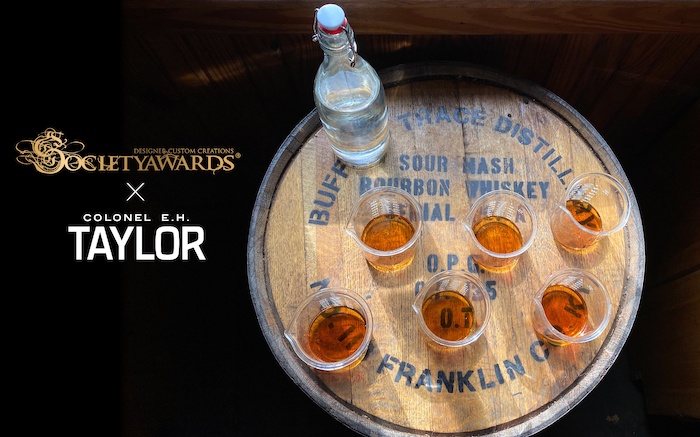 A final tasting of select E.H. Taylor barrels before selecting the barrel. (image via Society Awards)

Their second project with Buffalo Trace was something the distillery had never allowed for a private client. Society Awards officials explained that the original barrel they purchased was “so special,” that they were able to ship it to Jalisco, Mexico to have a second life aging a fine añejo from Corazón Tequila … another Buffalo Trace brand. This innovation is now offered to all Buffalo Trace single barrel select clients.

For this current E.H. Taylor project, a number of barrels were scoped out. Society Awards officials said the selected barrel … crafted of new American oak … was filled in fall of 2010 with a proprietary rye mash formula. Over the course of the last decade, the distillery team at Buffalo Trace identified this barrel as having the unique character to yield a truly exceptional bourbon deserving of the E.H. Taylor name.

This January, the barrel was finally moved from its home of 10 years on the 8th floor of Warehouse I and bottled exclusively for Society Awards. There was no immediate mention of how the bottles were going to be distributed.