It is East meets West, Beam Suntory style. Unveiled today by spirits giant Beam Suntory is Legent, a bourbon said to be unlike no other. It is a meeting of the minds of two of Beam’s master whiskey craftsmen, Fred Noe, seventh-generation master distiller of Jim Beam and Shinji Fukuyo, fifth-ever chief blender of Suntory.

What you have with Legent is essentially a bourbon that’s been crafted by Noe and blended by Fukuyo. More specifically it starts as a “historic bourbon recipe” from Noe’s family (a mash bill that includes corn, rye and malted barley) that gets the usual Beam bourbon treatment – high quality grains, Kentucky limestone water and aging in newly charred white oak barrels. Where it goes from here is that it is further aged in “hand-selected” ex-red wine French oak barrels and ex-sherry casks, the former of which is said to convey to the bourbon “a light tartness [that] helps punch up the dried flavors,” while for the latter imparts “layers of spice and fruity undertones” and also “its deeper, reddish color.” 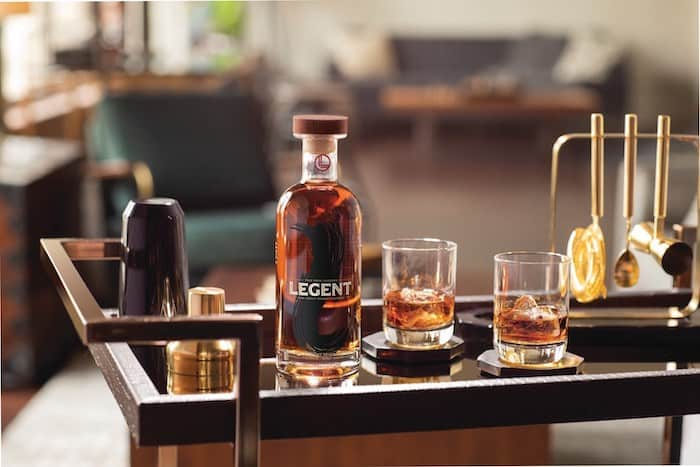 Once this bourbon has been deemed ready after the extra aging time, Fukuyo stepped in and blended it with other Kentucky straight bourbon for the final product. There’s a lot of thought and process that goes into what he needed to do here, given the three barrel types at play (bourbon, sherry, red wine). The final product is seen as a bringing together of over 220 years of bourbon making and nearly 100 years of Japanese whisky knowledge, something only the likes of Noe and Fukuyo could pull off together.

“Legent is really something special,” said Noe in a prepared statement. “As a bourbon distiller, I enjoy breaking rules and creating new traditions. It was a real honor collaborating with Shinji on what I think is different from anything out there in the bourbon world.”

“I have always been fascinated by the flavor profiles that can be achieved through innovation,” added Fukuyo. “Using the historic bourbon recipe of Fred’s family as a solid foundation, I was able to explore new taste profiles and reach a final product that reimagines what the future of bourbon can be.”

Legent is bottled at 47% ABV (94 proof) and will price at around $35 USD for a 750 ml bottle when it comes to market. It is suggested to be enjoyed neat, on the rocks or in a classic or new age bourbon cocktail. Very limited official tasting notes suggest that “on your palate it starts like a bourbon – rich, warm and oaky. Then, like a Japanese whisky, it features complex layers and a bright, smooth unexpectedly long finish.”