At 90% Bloody Butcher corn, 5% rye, and 5% barley, the bourbon was aged two years and nine months. The distiller’s tasting notes find the spicy and sweet flavors marry for a smooth taste. 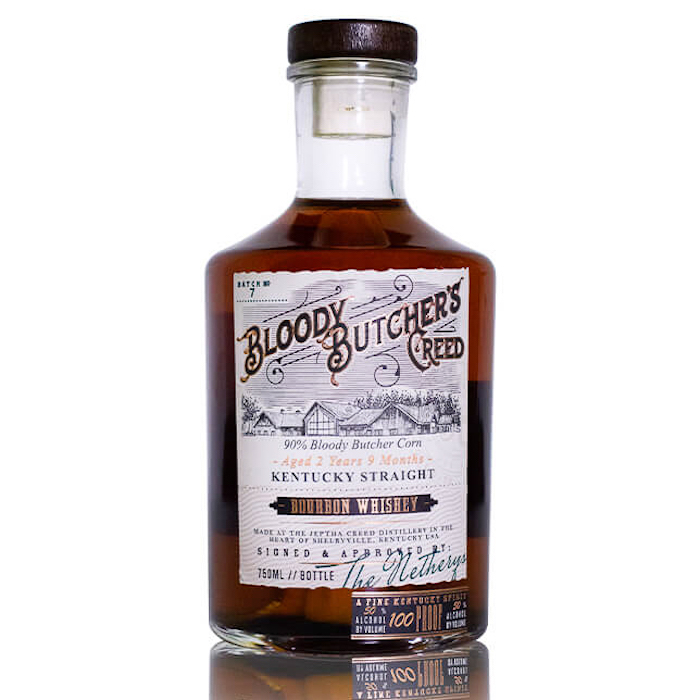 In August of 2016, Jeptha Creed distilled and barreled the first legal barrel of bourbon in Shelby County, Kentucky since before prohibition. In May of 2019, Jeptha released its first Straight 4-Grain Kentucky Bourbon.

Jeptha Creed is noted as being owned and operated by mother-and-daughter duo Joyce and Autumn Nethery, and the distillery sits on 64 acres of farmland, where the family grows the Bloody Butcher Corn used for all their products, including vodka, moonshine, and bourbon.

An heirloom variety, Bloody Butcher Corn traces its roots to 1840s Virginia. It’s named for the fact that it starts out as a white corn, then develops a deep, blood red color as it matures. It’s considered a fragile crop, as it is an open pollinator and can pick up bad traits from other, neighboring crops.

The Nethery family are fifth-generation farmers, and nearly half of their acreage is dedicated to growing their heirloom Bloody Butcher Corn.