New Happenstance Whiskey Sees Itself Having An Unexpected Modern Edge

The Founder’s Edition Bourbon of Happenstance is a new double-distilled straight bourbon aged for four years in new white American Oak barrels that contains a complex combination of vanilla, hazelnut, toasted oak, honey and toffee notes, according to official tasting notes. The bottle was designed by founder of Happenstance Paige Parker and contains foil and noir finishes with modern lettering with an approachable branding and color pallet. It finishes off with wings that wrap the bottle.

“We wanted to create a product that pays homage to the tradition of American bourbons that have come before us, but with an unexpected punch of today’s most sought out flavors,” Parker said in a prepared statement. “Although we believe many great moments happen by chance, our premium-bourbon is not one of them. At Happenstance, we’re raising a new generation of whiskey lovers who celebrate life’s little moments, so cheers to that!” 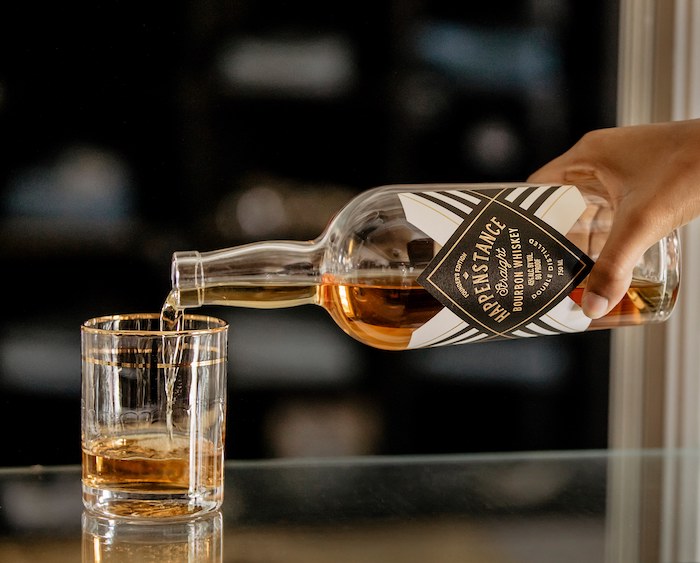 Parker aimed to make a brand that pays homage to the tradition of American bourbons that have come before, but with what she feels is an unexpected punch of today’s most sought-out flavors and that also welcomes both the introductory whiskey drinker and seasoned professionals alike.

Blended and bottled in Nashville, Happenstance Founder’s Edition Bourbon is 90 proof (45 percent ABV). The 750mL bottle retails for a suggested retail price of $55.99 and online ordering will be available for the Nashville market on the Happenstance website this month. The bottling is currently available at select Nashville liquor stores, bars and restaurants and will be coming soon to additional U.S. markets.

11
Shares
1.9k
Views
Share on FacebookShare on TwitterGet Our Newsletter
Read More Whiskey News
Whiskey Review: Flaviar Corn Trooper United Craft Bourbon
Cheers to the Dads! Personalize a bottle of his favorite whiskey to create a modern gift for the modern man. Use code: FATHERSDAY20 for $20 off your next order of $100 or more at ReserveBar