The extremely limited-edition product hit shelves this month and will be available exclusively in Illinois and through a direct-to-consumer channel online.

“This represents a significant milestone of success for our team,” FEW Spirits Founder Paul Hletko said in a prepared statement. “We have overcome so many obstacles to get here, and we owe a huge debt of gratitude to our fans, friends, and family.” 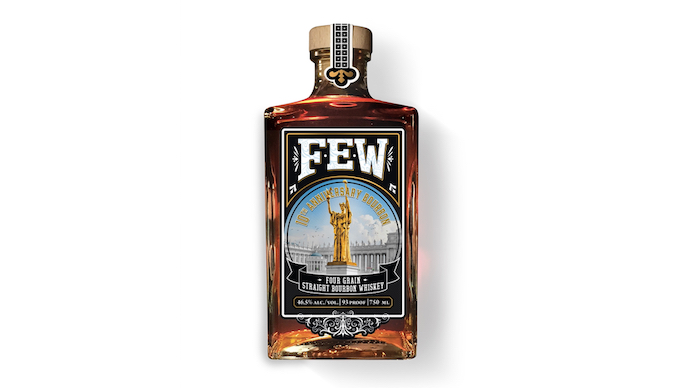 There will just be 650 initial cases of the FEW 10th Anniversary Straight Bourbon Whiskey made, comprised of 750 ml bottles which are bottled at 93 proof or 46.5% alcohol by volume. The mash bill includes corn, rye, barley and wheat and the product was aged six years in American White Oak.

The distillery said the FEW 10th Anniversary Straight Bourbon Whiskey has tasting notes of spicy cinnamon on the palate with a round finish.

It will be sold at a suggested retail price of $50.

“FEW is built on defiance and a refusal to accept the status quo. We defied the odds by choosing Evanston as our home, actually changing the laws of our beloved Prohibitionist hometown. We are inspired by the 1893 Chicago World’s Fair, a time when the eyes of the world settled here as we celebrated innovation and new ways of thinking and doing things,” Hletko said. “We deliberately chose to craft a product that would require years of ageing before it could be sold. We chose to create grain-to-glass spirits, using local grains and materials, although cheaper and easier alternatives are everywhere. And we defiantly made a world class Bourbon from Chicago, when most people thought that wasn’t even possible.”

The distillery is expanding its facilities and investing in its future as well. Among other things in the works is a bottled in bond bourbon.