Chicken Cock Whiskey, first established as an American whiskey brand in 1856 in Kentucky, has been undergoing a revival in recent times under new ownership. One of its most recent releases was a 10 year old, double barreled bourbon, and now a new bottling just announced has been finished in ex-ale barrels.

The new Chicken Cock Beer Barrel Select, according to those behind it, is a blend of 1.5-11.5 year old Kentucky bourbons finished in what’s described as “Walnut Brown Ale” barrels. In the summer of 2018, six barrels that had held Chicken Cock’s 10-Year-Old Double Barrel Bourbon were given to Goodwood Brewing in Louisville to finish their Walnut Brown Ale. 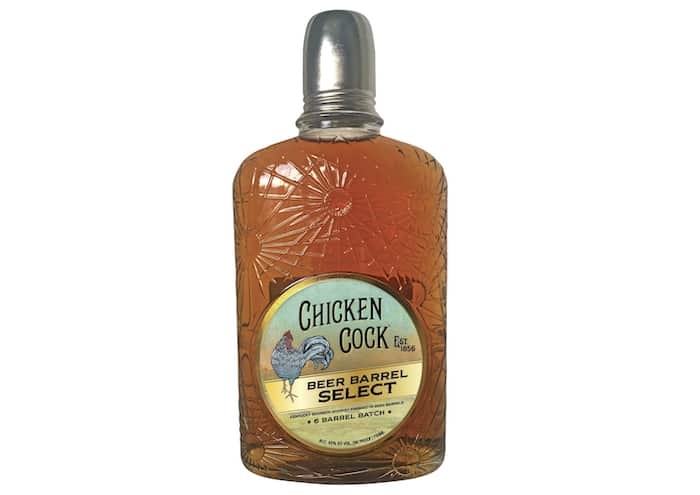 Once finished, Goodwood Brewing returned those six barrels to Chicken Cock. Chicken Cock Master Distiller Gregg Snyder, working alongside O.Z. Tyler’s Master Distiller Jacob Call, then filled them with the bourbon and let the contents sit for an additional six months before final blending and bottling.

Chicken Cock Beer Barrel Select is a limited edition offering, with just 1,800 bottles having been bottled at 45% ABV (90 proof) and pricing around $80. It is set to be available in AL, CO, FL, GA, IL, KY, MS, NC, SC, and TN, as well as online. Limited official tasting notes for this non-chill filtered whiskey suggest it is “full-bodied, with initial notes of butterscotch, caramel, and vanilla, followed by a hint of toasted oak, and then a sweet finish with nut and chocolate flavors.” It is said to also still retain “the flavors and slight haze” of the ale.

The Chicken Cock brand, for the curious, was established in 1856 in Paris, Kentucky. It reportedly rose to fame as the house whiskey at the Cotton Club, one of the most legendary speakeasies during Prohibition. Known as “The Famous Old Brand” and “The Whiskey in a Tin Can,” Chicken Cock was smuggled into the Club in sealed tin cans, then ceremoniously opened tableside. After Prohibition, the brand enjoyed a resurgent couple of decades before a distillery fire put it out of business for more than 40 years.