The Buffalo Trace O.F.C. Vintage bourbon series, now in its fourth release as we report about below, is a chance for the popular Kentucky distillery to push out to market some of its rarer and older whiskey stocks that have yet to be over-oaked in barrel. The latest is also among the oldest, having been distilled in 1994 and put into bottle some 25 years later.

The new Buffalo Trace 1994 O.F.C. Vintage Bourbon, according to those behind it, was distilled and rolled into an aging warehouse in the same year that “saw box office hits like ‘Forrest Gump,’ ‘The Lion King’ and ‘Pulp Fiction,’ and headlines documented Nelson Mandela’s inauguration as South African president and OJ Simpson’s infamous white Ford Bronco chase.”

It draws its O.F.C. moniker, like the others, from “a name derived from this National Historic Landmark’s original moniker – the O.F.C. Distillery – renowned for producing top class whiskey during its tenure.” 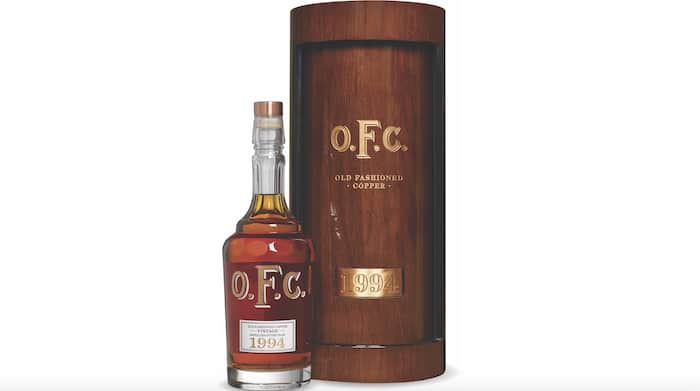 The 1994 bottling, pricing around $2,500 and bottled at 90 proof, is being targeted as a collectible offering that is a very limited release. It arrives “in a wooden display box containing a provenance card.  Inside the wooden box lies a crystal bottle with real copper lettering in-laid in the bottle with a hand applied paper label. The label on the back of the bottle notes the milestones for the year 1994. The provenance card contains the same information found on the back label. ”

Official tasting notes from Buffalo Trace for the 1994 O.F.C. Vintage Bourbon, which should be reaching retail later this month, describe the whiskey as having “lots of cherry on the nose followed by butterscotch with hints of brown sugar and oak. Toasted caramel, cinnamon and oak greet the palate, followed by a long finish of coffee, herbs and oak.”

538
Shares
7.7k
Views
Share on FacebookShare on TwitterGet Our Newsletter
Get The Glenlivet 18 Year Old at ReserveBar. Shop now!