Blue Run Spirits is a new spirits company that, at first glance, looks to have some significantly deep pockets involved in it. Founded by a Nike designer, the first director-level employee at Facebook, a hospitality executive, a political advisor, and a philanthropist, this group is in turn backed by a team of advisors including Nike marketing experts; the Campari communications veteran behind the US launch of Espolòn Tequila and the Aperol Spritz; a former vice president of innovation from Brown-Forman; a former spirits distributor; and others with deep industry experience.

Given the power hitting going on above, it would make obvious sense for such a group to turn to someone with deep whiskey making experience to help them in development of their spirits program. And that is exactly what they’ve done – turn to former Four Roses master distiller Jim Rutledge, making him their “liquid director.” Rutledge, since he left Four Roses in 2015, has very slowly been building out the idea of his new JW Rutledge Distillery, which is currently delayed due to Covid-19. 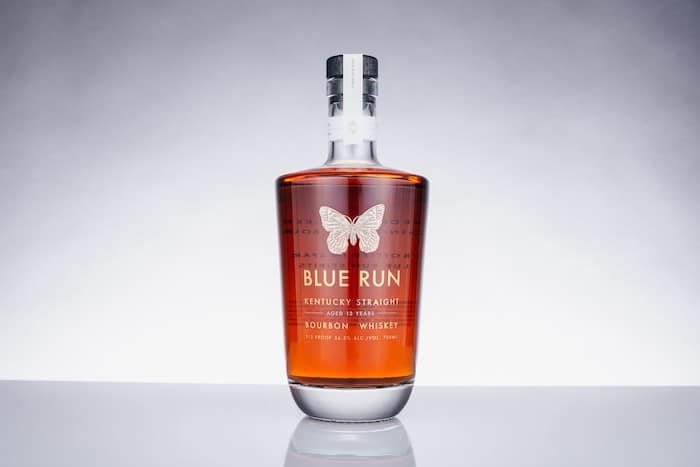 Rutledge, for the Blue Run brand, has put together as the first release a sourced 13 year old, small batch bourbon that is said to feature all the “hallmarks of a Rutledge whiskey – exceptionally smooth and mellow, with a long, sweet and dry finish; little to no burn on the back end.”

It is bottled at a respectable 113 proof, which is stronger than many other extra aged bourbons because, as Rutledge spells it out in a prepared statement, it provides “more flavor because less water is added to reduce proof. While the proof is almost as high as a barrel-strength Bourbon, its smoothness could be compared to Bourbons with proofs 10-20 points lower.”

As part of the development of Blue Run Spirits, this bourbon is housed in a modern looking bottle because, as those behind it explain, “the weighty, hand-numbered bottle is perfectly proportioned, featuring the brand’s signature gold butterfly medallion which symbolizes the metamorphosis of the Bourbon industry as it reaches a broader audience which appreciates fine Bourbon through Blue Run.”

“We noticed that our broad, diverse group of friends also shared our passion for great Bourbons and ryes and, yet, no brand had reached out to them; no whiskey was speaking to them or shared their values,” noted Mike Montgomery, Blue Run Spirits CEO. “We saw an opportunity to share the joy of truly exceptional whiskey, that only whiskey aficionados had enjoyed until now, with our friends, families, colleagues and others.”

The Blue Run Bourbon is pricing around $170 per 750 ml bottle, being available through select Kentucky and Georgia retailers as well as through the Blue Run Spirits website (where it looks to already be sold out). Only 2,600 bottles are being made available in the first run, and it will be followed by other expressions selected or distilled by Rutledge, who has already crafted Blue Run’s next whiskey.

Official tasting notes for this release are as follows.