Editor’s Note: This is a continuation of a two part series from contributor Michael Veach on Maker’s Mark Private Barrel Program.

Making your own Maker’s Mark private barrel selection for Maker’s Mark 46 is daunting. There are ten staves to be placed in the barrel, and each stave can be one of five different woods that gives a different flavor to the whiskey. Jane Conner, Maker’s Mark’s brand ambassador, told us that are 1,001 different combinations that can be made. Math is not my strong point, so I took her word for it.

Each blend we created was first made in 100ml sample batches, with each “stave” represented by 10ml of whiskey aged with that type of wood. Jane is upfront in telling us that the whiskey mixed today will not taste exactly like the final product, but it will be similar. (Actually, she tells us the final product will be better.)

When it comes time to make our selections, the booklet provided at the beginning of the day became a valuable tool to help keep track of the stave choices – and their unique flavor qualities – that will impact the final blend’s flavor profile. Scott also brought out a special board carved with slots that hold poker chip-sized pieces of wood, each emblazoned with the two-letter abbreviation of the wood type, to keep track of each taster’s choices.

I broke the ice and started off with three staves of P2 (Baked American Pure 2), three staves of Sp (Toasted French Spice), two staves of Mo (Roasted French Mocha), one stave of Cu (Seared French Cuvée) and one stave of 46 (Maker’s Mark 46 French oak). Each selection was marked by the addition of another poker chip. Once I selected all 10, samples of each were mixed according to my proportions in a flask, and we all tasted the bourbon together. 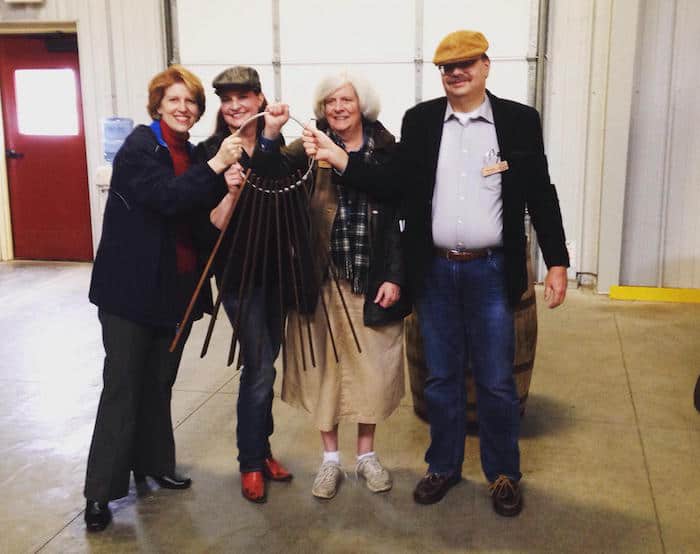 That gave us six different combinations. Jane and Scott offered to let us try some others, but we felt like a half-dozen was enough. While we liked all of the mixtures, together we narrowed it down to two.

Everybody left the room and Scott and Adam mixed up some more of our two choices and we did a blind tasting. We came back with four glasses in front of us. Two were the Bourbons neat, and two were the Bourbons with a single cube of ice. We took a vote, and made our selection. I won’t say what the final two selections were or which ended up being chosen, as that is up to Party Mart to disclose – if they wish to do so.

We had made final choice, but the day was not over. We were then taken to the cistern room where a barrel was waiting. An employee removed the barrel head; we could see it was a freshly emptied barrel with a little liquid still in the bottom. Scott took a stainless steel ring and barrel staves of the woods we selected, and had us place the staves on the ring with spacers in between each stave. This ring of staves is then placed into the barrel, and the head is replaced.

We then moved over to the Tasting room, stopping at the gift shop to dip an empty Maker’s 46 bottle as a souvenir. In the tasting room we were given sheets of back label to sign. We then placed one of our signed labels on our souvenir bottle.

The final stage of the process was to fill the barrel with cask strength Maker’s Mark and place it in the warehouse. We were told it was 111.1 proof. The barrel is then transported to a special section of the warehouse where all of the private selection barrels will be stored for nine weeks before they are dumped and bottled. Maker’s only offers this program from October to March, because they want the slow extraction of the flavors that comes with cooler temperatures. This is there first year and they are only doing 45 barrels this year. We were number 20.

It was 3:30 by the time we finished. We then enjoyed a box lunch in the tasting room and were driven back to Louisville. Before we left, they gave us a small 100ml bottle of the bourbon we selected to compare to the final product. We all agreed that this was a very unique selection process and an enjoyable day at the Maker’s Mark distillery, and we are all looking forward to tasting the final product in May.