Indiana’s Midwestern Grain Products, famously the source of countless whiskeys branded as craft and small-batch, has added another expression to the growing roster of American whiskeys bottled and sold under their own labels. We reviewed their George Remus bourbon last year (the verdict: pretty good!); the MGP lineup also includes Rossville Union rye, which competes with names like Angel’s Envy Rye, Bulleit Rye, and Templeton Rye, all of which, of course, also come from Lawrenceburg, Indiana.

New to that list is Eight & Sand Blended Bourbon Whiskey, a non-age-statement expression the distillery describes as “a blend of fine bourbons and whiskies” [sic]. “We’re proud to position Eight & Sand as an engine of innovation in our portfolio,” said Andrew Mansinne, MGP’s vice president of brands, in a prepared statement. “We’ve designed Eight & Sand as an approachable blend of bourbons and whiskies designed to appeal to consumers looking for great value, great quality and smooth taste.” 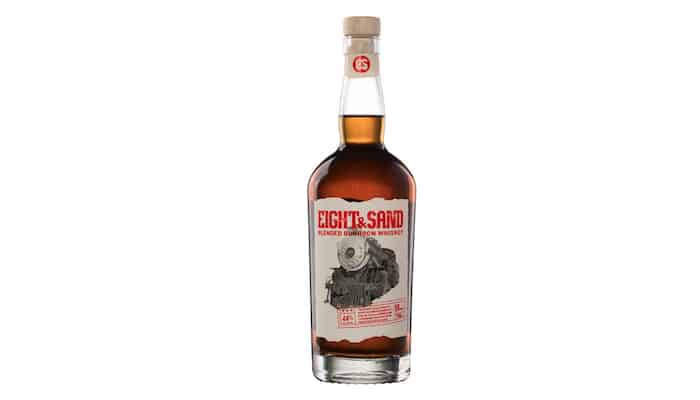 The “Eight & Sand” branding, noted MGP, is a reference to railroad travel: the phrase “refers to the eighth (and fastest) notch on a locomotive’s throttle and the sand used on the wheels to prevent slipping. To wish a train crew an ‘Eight & Sand’ is akin to ‘smooth sailing.'” The theme is a reference to the distillery’s headquarters, which are not in Lawrenceburg, but in Atchison, Kansas. There’s a historic locomotive there called the Atchison 811. “We were inspired by the story of the American railroad, and Atchison’s local E&S Locomotive 811 which has long connected our hometown to the country,” said Mansinne.

The official tasting notes are sparse, calling out “spicy rye and cinnamon notes, followed by a touch of caramel at the caboose.” Though little information about the actual whiskey is provided, it sounds like this may be a high-rye blend, not unlike the George Remus bourbon.

This train-themed whiskey is on shelves in Arizona, Colorado, Illinois, Indiana, Kansas, Kentucky, Minnesota, Montana, Missouri, Nebraska, Texas and Wisconsin, at a suggested retail price of around $30 per 750 ml bottle. It is bottled at 44% ABV.