How Many Calories Are In Whiskey?

January is here, and the time to undo the indulgences of the holidays is upon us. Fortunately, that doesn’t mean you’ll need to do without your daily dram—although if you’re really economizing, this might be a good time to shelve your barrel-proof bourbons and opt for something a little lower in alcohol.

Whiskey is among the most diet-friendly alcoholic drinks there is, at least in terms of a calorie-to-booze ratio. A one and a half ounce shot of 86 proof whiskey contains just 105 calories. One 12-ounce bottle of craft beer that contains about the same amount of alcohol? You’re looking at double the calories. 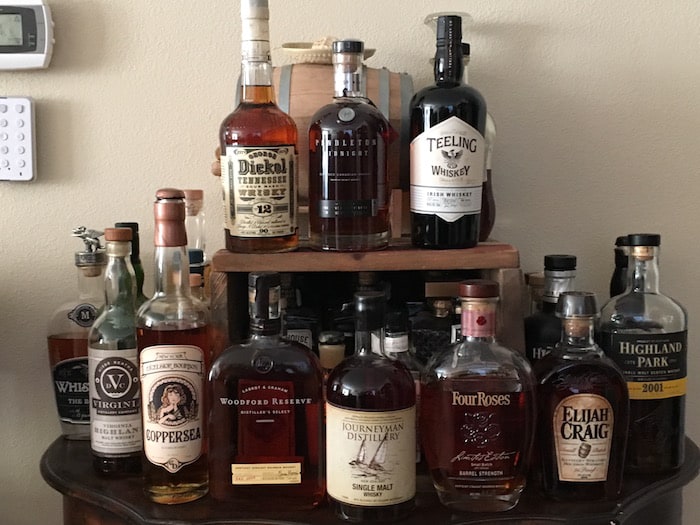 Why is whiskey so low-calorie? Because, unlike beer and wine, it contains no sugar, no fat, and no carbohydrates. The distillation process strips all of these components from the final product, reducing it to nothing but water, alcohol, and a host of congeners that give the whiskey its flavor and aroma.

(Update: Paul Hughes reminded me that charred or toasted barrels do, in fact, contain simple sugars, which are transferred to the whiskey during aging. Sugar concentrations increase as the whiskey spends more time in the barrel, but even at the upper end of extraction, the sugar content of whiskey is still quite small – less than one calorie’s worth per bottle of 80-proof whiskey.)

That means that the calories in whiskey come almost entirely from alcohol, which contains about seven calories per gram. That makes alcohol higher in calories than protein and carbs, but lower in calories than fat. This means the exact calorie content of your whiskey depends on the proof of your spirit, and as the proof goes up, so do your calories.

If you’re curious about the calorie content of your favorite whiskey, you can use this alcohol by volume calculator. Just enter the proof and the amount you like to drink, and then multiply the number of grams of alcohol by seven for a rough total.