A statement from the university said the effort at Star Hill Farm, home to the Maker’s Mark Distillery, represents the most comprehensive natural range of white oak to date anywhere in the world. The American white oak repository is part of a larger mission to transform the conservation of a species critical to many American industries, including Kentucky bourbon, and to prioritize the present and future of forests and rivers.

Laura DeWald, UK Department of Forestry and Natural Resources tree improvement specialist, is leading a project collecting more than 300 unique families of white oak from across the United States to plant at Star Hill Farm. 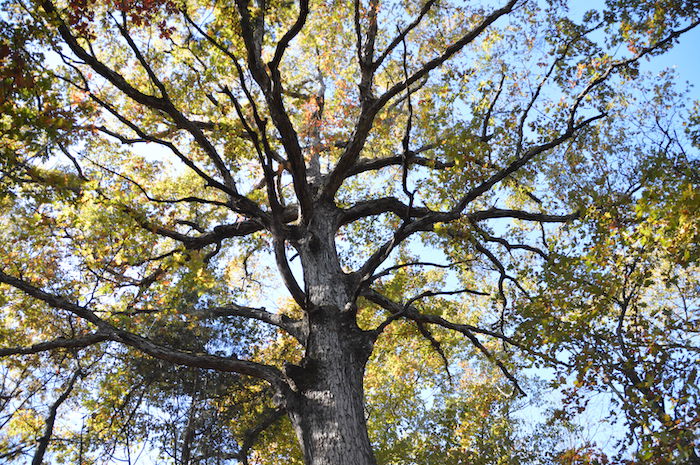 “MM1” at Star Hill Farm (Maker’s Mark), which is one of the oldest white oaks in Kentucky (image via Maker’s Mark)

The first planting took place on April 15th, and successive plantings over the next several years will result in the largest single white oak genetic repository in the United States.

This repository will provide the foundation for research and tree improvement to address current and future threats to white oak trees and the millions of acres of forests they dominate. It will also support white oak-dependent industries that contribute billions of dollars to rural and urban economies across the region, most notably, the spirits industry.

This American white oak repository is the second phase of a collaboration between UK and Maker’s Mark, which also includes the world’s first comprehensive effort to map the white oak genome.

Working with Maker’s Mark and the cooperage Independent Stave Company, the UK team is studying the genetics of the mother tree, called “MM1” at Star Hill Farm, which is one of the oldest white oaks in Kentucky.

This tree has been exposed to incredible climate variations and is estimated to be 300 to 500 years old. Data from this study will give UK, ISC and Maker’s Mark information about the longevity, disease resistance and vitality that American white oak can offer to the bourbon industry and beyond.

“We have lost or are fast losing some of our most valuable tree species in the U.S. such as ash, chestnut and elm due to disease and pests,” said Seth DeBolt, Beam Institute director. “This collaboration, the combination of the white oak genetic fingerprint and the germplasm planted solely at Star Hill Farm, will allow us to prepare for any future risk to this organism. In simple terms, if a risk arises, we can look for examples of natural variation within the germplasm that can tolerate new pests or even different climates.”

Rob Samuels, eighth-generation whiskey producer at Maker’s Mark, said the distillery is committed to the partnership. “We’re so honored to work with the experts from UK who share a common passion with our team for ensuring the sustainable future of the American white oak, and we’re excited for Star Hill Farm to be the new home of this essential repository and study, in addition to the home of Maker’s Mark Bourbon.”

“To do something like this that talks about the sustainability of a tree species, it will take a long time for the work being done here to come to fruition, so it takes a vision and commitment,” said Jeff Stringer, UK Forestry and Natural Resources department chair.

“The commitment of Maker’s Mark and Independent Stave Company will substantially improve the sustainability of this species, other forest species and this signature industry,” said Nancy Cox, UK vice president for land-grant engagement and dean of the College of Agriculture, Food and Environment. “We cannot thank them enough for their partnership, vision and sense of community.”