The Maker’s Mark distillery in Kentucky last year kicked off its Wood Finishing series with the release of a bourbon making use of Stave Profile RC6, which is said to have “amplified fruit flavors inspired by the proprietary Maker’s Mark yeast strain.” It is back now with another offering in this line up, this time focusing upon its “pursuit of enhanced vanilla and caramel notes that have defined its classic expression for more than fifty years.”

The new Maker’s Mark 2020 Limited Release, according to those behind it, is said to differ from the 2019 expression in that it utilizes ” two stave styles – one drawing on vanilla, the other on caramel – that when married together yield a rich Maker’s Mark reminiscent of butter pecan. The multi-stave approach was the result of more than twelve months of experimentation with Maker’s Mark barrel producer Independent Stave Company. 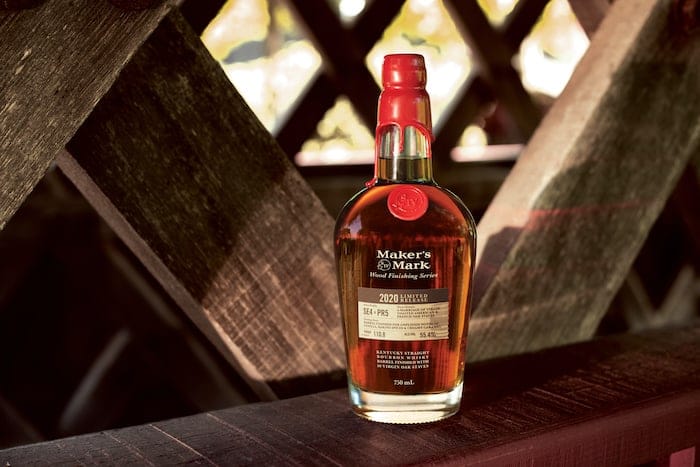 “Since the introduction of Maker’s Mark 46, wood staves have become our tool of choice for unlocking and amplifying natural flavors already present in our classic Maker’s Mark – always purposefully and with a specific taste vision in mind,” said Jane Bowie, Director of Innovation at Maker’s Mark, in a prepared statement. “Where Maker’s Mark 46 was about creating a ‘bolder’ Maker’s, and the 2019 release was all about boosting the notes of baking spice and fruit, our 2020 Limited Release has been a quest to amp up those rich vanilla and buttery-caramel flavors that typically stem from our unique approach to seasoning our barrel wood outside for a full year.”

This new Maker’s Mark bourbon release follows on the heels of the very recent, limited nationwide debut of Maker’s Mark 46 Cask Strength. Normally only for sale at the distillery in small batches, it has been pushed out to the greater retail market as part of celebrating the 10th anniversary of Maker’s Mark 46. This latter bourbon was the first from this distillery to engage in the stave finishing technique it is now known for.

Plans call for Maker’s Mark 2020 Limited Release, bottled at 110.8 proof, to price around $60 per 750 ml bottle come September. It, like other releases in the Wood Finishing Series, was crafted “by finishing fully-matured, cask strength Maker’s Mark in secondary barrels containing the proprietary wood staves.

“The barrels were then rested in the Maker’s Mark limestone bourbon cellar where the cask strength bourbon interacts with the staves, before being mingled together to develop the expression’s unique flavor.”

You’ll find some official tasting notes below for your consideration.