Bourbon and cigars go together like peas and carrots, and at no time is that more apparent than Derby week in Louisville. Whether you smoke cigars or drink bourbon the rest of the year is irrelevant- if you’re in Louisville during Derby, you will be partaking in both.

Louisville smoke shop owner Jason Shepherd recently devised a way to combine the two in his Distiller’s Blend Cigars from J. Shepherd. Through trial and error, he came up with a new system to create bourbon infused cigars within a bourbon barrel. It’s a different process than most whiskey-flavored cigars that are sprayed with some sort of whiskey-flavored concoction that may or may not contain actual whiskey. 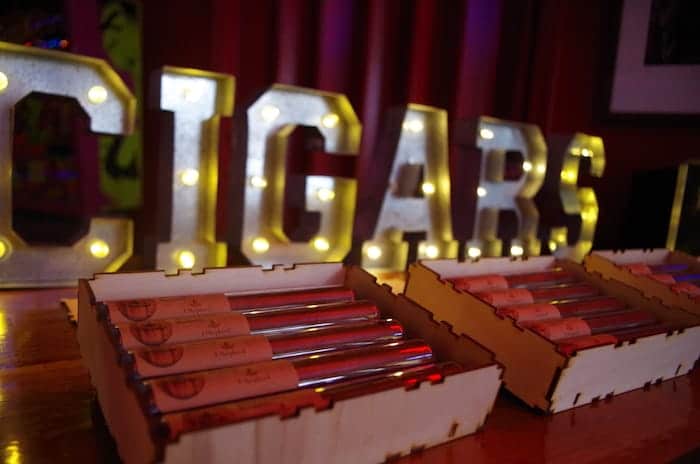 Because the end product often doesn’t taste like it should, Shepherd got the idea to try a new approach several years ago. “I ruined many cigars and went through several bottles of bourbon,” he laughs as he recalls the process. Shepherd’s process, like the bourbon process, contains only whiskey and water. Cigars are suspended in a barrel over the whiskey solution, where they undergo a proprietary process for 3-6 months.

He made his first few batches of bourbon infused cigars for Michter’s, but they have not been available for sale to the public until now. He had friends and regular customers try some of his early experiments and found overwhelming interest. Every single person who tried them, he says, came back and asked when they would be available for sale.

Shepherd finally celebrated his retail launch Derby week at Haymarket Whiskey Bar. Haymarket will be the first place in town to receive special cigars for retail, including Michter’s, Angel’s Envy, and Woodford Reserve infused cigars. Other retail locations will follow.

The cigars themselves, manufactured by El Titan De Bronze, are made with Cuban seed tobacco and a Cuban Criollo wrapper. The filler and binder are from Honduras and Nicaragua. Distiller’s Blend by J. Shepherd are for sale at J. Shepherd Cigars and select retailers in Louisville.

161
Shares
175
Views
Share on FacebookShare on TwitterGet Our Newsletter
Free shipping on any Bruichladdich product at ReserveBar with code BRUICHLADDICH! Valid 7/30-12/31. Shop Now!