When Brown-Forman acquired its first cooperage in 1946 it was called the Bluegrass Cooperage Company.  Previous to that the facility was known for making high quality wood furniture.  Established in 1922 as the Wood Mosaics Company, it earned the distinction of making one million Enfield rifle walnut gun stocks for the British war effort in 1940.  The company continued to produce materials for the war effort, supplying the United States Army and Navy aircraft quality plywood until it was sold to Brown-Forman in 1946.

It wasn’t until just a few years ago the facility was renamed The Brown-Forman Cooperage.  Today Brown-Forman has four mills and two cooperages just to supply new charred oak barrels for their own product lines.  Jack Daniel’s is their best selling brand- it’s the number one American Whiskey in the world.  Woodford Reserve and Old Forester are their flagship bourbon brands, of which the latter is the brand that started the company in the whiskey business.  Other global brands such a Herradura tequila are also aged in barrels from their own cooperages.  The Louisville facility produces 2500 barrels a day. 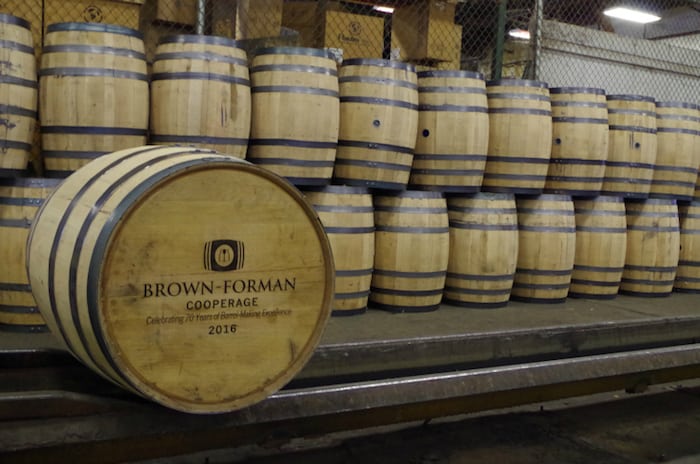 On February 10, 2016 the cooperage held a ceremony to commemorate 70 years of making their own barrels.  All the employees who had been with the company more than 3 decades- about a dozen men- were honored for their service.  The cooperage’s most veteran employee, Charlie Harden, rolled out the ceremonial barrel.  Hardin has worked at the cooperage for 47 years. 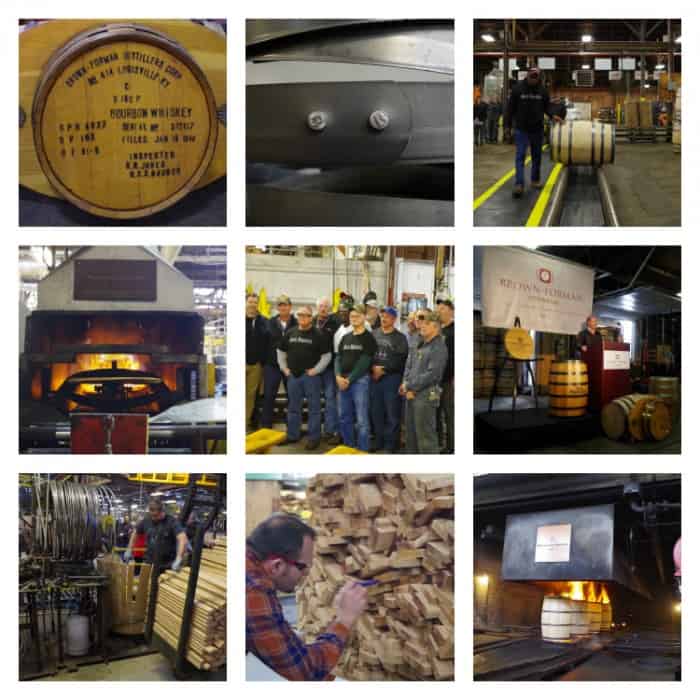 Here’s how Brown-Forman officially describes this cooperage operation – also for your consideration below are some videos recorded by other media attending this event today.

Located 15 minutes south of the Campus, Brown-Forman Cooperage is one of the world’s largest producers of whiskey barrels. A subsidiary of Brown-Forman, the cooperage makes white oak barrels for maturing some of our finest brands, including Jack Daniel’s, Early Times, Old Forester, and Woodford Reserve. Brown-Forman is the only major distiller in the world that owns and manufactures its own barrels. In 2009, the Cooperage was opened to the public to tours through a partnership with Mint Julep Tours.

“No matter where you are in the world, in 165 countries, if you have a glass of Jack Daniel’s, Woodford Reserve, Old Forester, Early Times, or our tequilas, Herradura and el Jimador, keep in mind that every drop was aged in a barrel that one of our cooperages made,” said Chris Morris, Brown-Forman master distiller and spirits historian, in a statement. “One-hundred percent of the color and arguably more than 50% of the flavor are the result of the work the men and women at our cooperages have done.”

We wish congratulations to Brown-Forman on reaching this milestone.  The Whiskey Wash looks forward to attending the 100 year ceremony as well.