Today, bourbon production is spread across the whole of Kentucky. But there was a time when the city of Louisville, and in particular its Main Street, was a hub of activity due to proximity to the Ohio River. Now, at a time when interest in bourbon tourism is surging, the city is looking to cash in with the unveiling of a Bourbon District in its central core.

This new Bourbon District, as it is being called, is being rolled out in phases through a collaborative effort led by the Louisville Downtown Partnership (LDP), Louisville Metro Government and the Louisville Convention and Visitors Bureau. It will feature historic site signs, destination signs, banners and a pop-up “eventscape,” all of which are focused upon marking Louisville’s historic role in the bourbon landscape while at the same time recognizing its current bourbon industry boom. 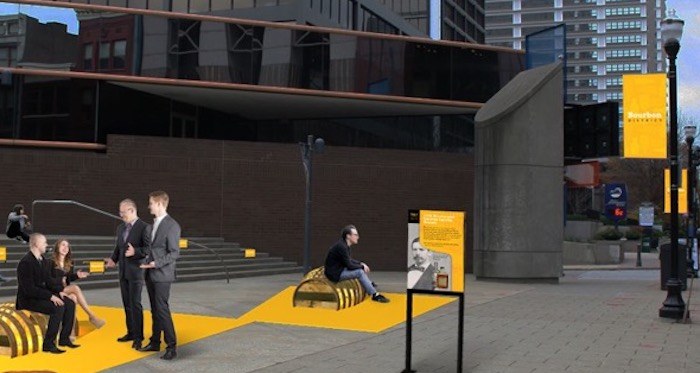 “Today, ‘Bourbonism’ is thriving in Downtown Louisville, with four distillery experiences already open and three more planned, as well as a number of additional bourbon attractions slated to open within the next few years,” said Louisville Mayor Greg Fischer in a prepared statement.

When complete, governmental officials said, the Bourbon District will be concentrated along Louisville’s Main Street from Jackson Street to 10th Street, and along Fourth Street from Main Street to Broadway. The initial phase will highlight the four active bourbon attractions, while future phases will bring more signage for both historic and upcoming bourbon experiences and locales.

“While Louisville’s bourbon story goes back to the late 1700’s, it’s only been in the last decade that bourbon tourism has become a defining point of our city’s authenticity,” added Karen Williams, President and CEO of the Louisville Convention & Visitors Bureau. “We are thrilled to be part of sharing this cultural heritage with locals and visitors and think it will enhance their appreciation of Louisville’s unique destination experience.”