Inspired by a drink in her book, “Tiki: Modern Tropical Cocktails,” the release is a whiskey sour riff with notes of lemongrass, made with Straight Bourbon, Rockey’s Liqueur, Coconut, Lime, and Jamaican #1 Bitters, according to official tasting notes. The label’s art is put together by Baltimore artist Nolen Strals and made up of bold lines, featuring Japanese imagery in the traditional American tattoo style.

“One of my favorite things about NYC’s drinking culture is the ‘nutcracker’ – and the enterprising individuals that have turned selling them into a lucrative side hustle,” Mustipher said in a prepared statement. “The Holy Tyger is perfect for a park or beach hang – think of it as my elevated answer to the nutcracker – easy to drink, straight up or on the rocks.” 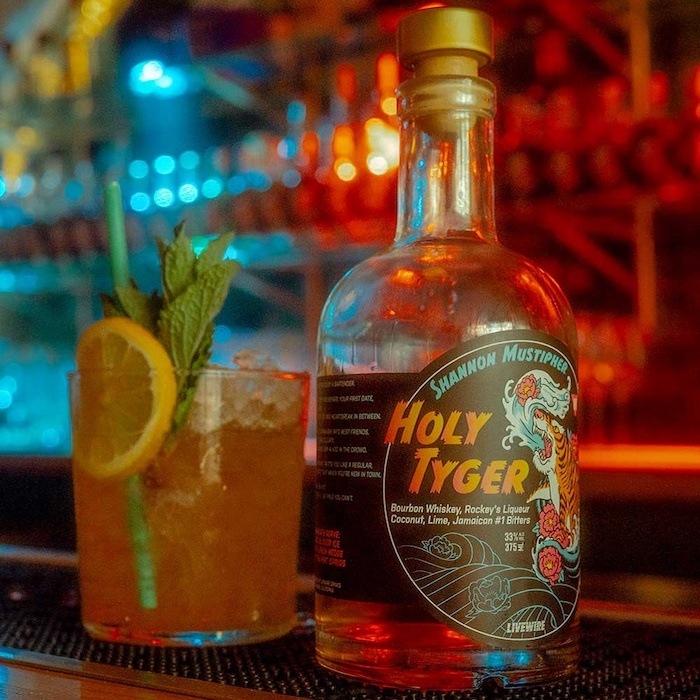 Holy Tyger is what Shannon describes as a “beach drink,” a whiskey sour riff with notes of lemongrass (image via LiveWire Cocktail)

Mustipher also stands as LiveWire’s first East Coast bartender collaborator, using what’s described as taxonomy as a way to dig deeper into her own knowledge, while using that understanding to then push boundaries and explore. With this, she educates and works with brands to help consumers grow their understanding of different spirits and drinks.

After launching a Caribbean rum-focused bar at Gladys Caribbean in 2014, she went on to found Women Who Tiki, a tropical cocktail-centric pop-up that gathers a team of women bartenders to share their talents and collaborate on creating a one-night-only experience.  Mustiphers’s writing, recipes, and opinions have been featured in a number of publications, including Vinepair, Saveur, Imbibe, GQ.com, and Liquor.com.

Holy Tyger is available in a 375ml bottle for a retail price of $24.99 in California and New York and on the distillery’s official website.