The Life and Legacy Of Heaven Hill’s Parker Beam

“Bernie, when I die, I hope it’s late in the afternoon so I can get a lot done that day.” — Parker Beam, master distiller emeritus, Heaven Hill Distillery, speaking to colleague Bernie Lubbers.

Parker Beam was a worker. During his long-standing, demanding role as master distiller at Heaven Hill Distillery, he even raised cattle, a sideline not for the faint of heart.

When he died Sunday, Jan. 8, he wasn’t working—at a job, anyway. Beam’s strength was devoted to live yet another day in the fight against the amyotrophic lateral sclerosis that robbed the 75-year-old of the power that brimmed from his every pore.

“He told me regularly, ‘Working hard is what I love to do,’” recalled Bernie Lubbers, Heaven Hill brand ambassador and occasional traveling companion of Beam’s. “He was something, a presence, lots of energy … and proud to be a Beam.”

Born Earl Parker Beam in 1941, he was destined to become a distiller as the son of Earl Beam. The elder Beam broke ties with his family’s namesake distillery in Clermont, Ky., to become master distiller at Heaven Hill in 1946. By 1960 he was at his father’s side at the distillery located at the edge of Bardstown, though he wasn’t making whiskey. According to the company, his indoctrination to bourbon making began with washing windows and scrubbing lime scale out of the cypress fermenters.

“It wasn’t glamorous,” Beam said many times. “But I learned how everything worked in the distillery, because back then you had to be chief cook and bottle washer.” Fifteen years later he became master distiller. 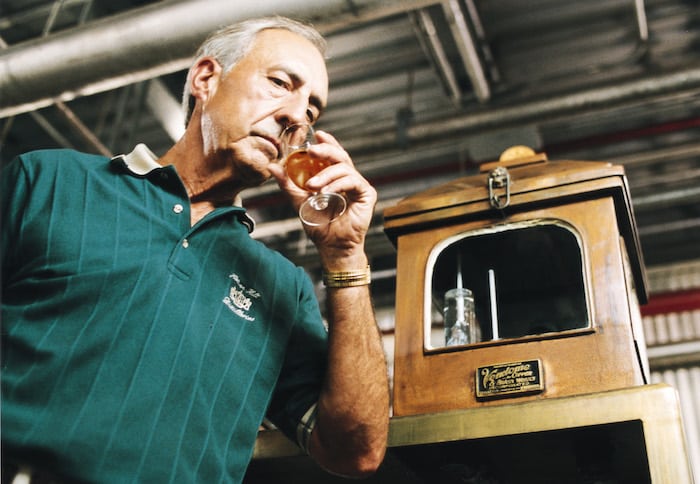 Beam led production at one of the nation’s largest spirits producers through grim times when bourbon sales sagged precipitously amid the wave of clear spirits rushing into the market. Yet during those doldrums, Beam innovated, creating the industry’s first small batch bourbon, Elijah Craig, in 1986, and the company’s single barrel bourbons, Evan Williams, in 1994.

When a tragic fire in 1996 destroyed Heaven Hill’s Bardstown distillery and some 90,000 barrels of bourbon in seven of its rickhouses, Beam oversaw the transfer of production to its Bernheim distillery in Louisville, where it remains.

Reflections of another master on Parker

Wild Turkey master distiller Jimmy Russell said the friendship between him and Beam extended at least 40 years. He said Beam had a great sense of humor, and a deep dedication to his products.

“Parker was so down to earth, friendly and funny,” Russell said. “He would never put out any product that he thought wasn’t up to his standards.”

Two days after Beam’s death, Russell, ever the wisecracker, was subdued when asked about the passage of yet another distilling great.

The night after Beam died, Lubbers and Heaven Hill’s marketing staff met for a scheduled dinner meeting. Though the mood was expectedly somber, it lightened eventually as staffers shared their favorite Parker Beam stories.

“We all were laughing and joking—which is perfect, because he always liked to get people laughing,” Lubbers said. He said Beam didn’t get laughs telling jokes, he “just made people laugh being Parker, by telling stories about his crazy life in the bourbon industry.”

Lubbers’ favorite Beam story centered on a trip to San Francisco. When Beam arrived early for a planned event, he was offered glass of water while waiting for others to arrive. He accepted, but noticed the water tasted bad.

“‘Bernie, they don’t have good water there anyway, but when I put glass down, I saw a cucumber floating in there—in my water,’” Lubbers recalled him saying. When Lubbers explained that a cucumber slice in water was stylish in some circles, Beam replied, “‘Bernie, I’m a farmer, and I know hogs will eat just about anything. But a hog will not eat a cucumber. So I don’t eat anything a hog won’t eat.’ … You never knew where he was going with one of his stories.”

Despite his ALS diagnosis in 2010, Beam continued working, traveling to see clients and customers at large events like WhiskyFest. Bourbon’s heyday was on, Lubbers said, and Beam wasn’t about to miss out.

“Parker was like most master distillers, who were never trained to be public speakers, but he could always command a room just being Parker,” Lubbers said. Beam became master distiller emeritus in 2014. “When he’d do a seminar at WhiskyFest, they always were packed. People wanted to hear what he said, and when he talked, the whole room got quiet.”

Over time, Beam did also. ALS, known also as Lou Gehrig’s disease, deprives victims of fine motor movement, such as speaking. But though Beam’s speech became sluggish and reduced, he still attended public events where possible, eager to see his distilling peers and grateful to shake hands with legions of fans.

“At last year’s Bourbon Festival (in September), he came to the Heaven Hill Cigars and Jazz event and stayed all night,” Lubbers said. “He made it a point to get dressed up, to get out and see everyone when he might not have felt like doing it.”

In a prepared statement, Heaven Hill president Max Shapira said Beam had etched his name in the annals of Kentucky bourbon history, but that his “humility and grace” is what “will forever be admired.” ALS may have taken his body, Lubbers said, but it never diminished Beam’s spirit.

“Anybody else … they might have been gone way before this, before Parker did,” Lubbers said. “But he fought it, and though we all knew it was coming, it’s still a shock that he’s gone.”