Laws Whiskey House out of Colorado has emerged in recent times as one of the more interesting craft whiskey makers in the US. They have an array of different whiskey styles out on the market already, including some of which meet the bottled in bond designation. It is to this latter category they are adding two new expressions now, including a corn whiskey and a two grain bourbon.

The first of the new whiskeys is the A.D. Laws Straight Corn Whiskey Bottled in Bond. Information from the distillery on this release indicates a mash bill that’s 86% corn and 14% Colorado grown barley malt. After going through open air, sour mash fermentation and double distillation, it was aged over four years in full-sized 53 gallon used American white oak barrels before being bottled at 100 proof. 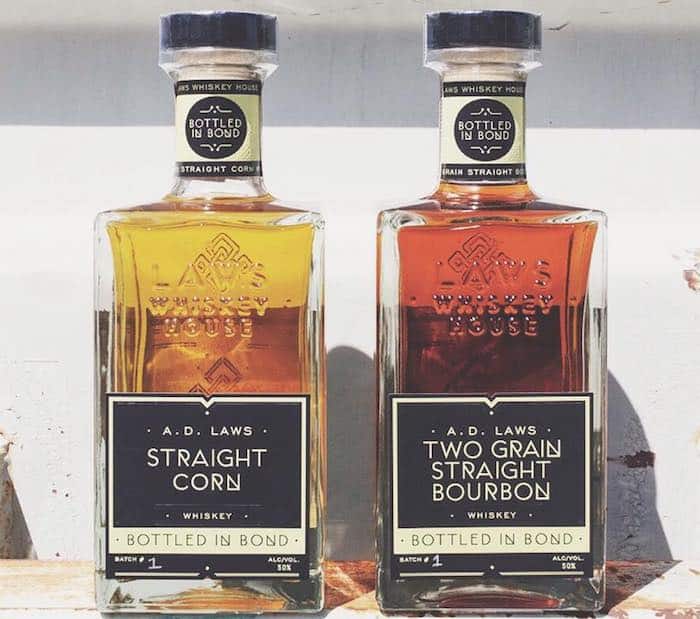 The other whiskey is the new A.D. Laws Two Grain Straight Bourbon Bottled in Bond. It has the same mash bill as the corn whiskey and was produced through much the same process as the corn whiskey, though since this is a bourbon it was aged instead for over four years in full-sized 53 gallon new American white oak barrels before being bottled at 100 proof.

Laws Whiskey House, with its focus on traditional American-style whiskeys, has aimed to make bottled-in-bond expressions a cornerstone of its line up. Bonded whiskeys, as we’ve talked about before, are bottled under U.S. government supervision and must be the production of a single season, single distillery, single DSP, aged in a federally-bonded warehouse for at least four years, and bottled at 100 proof. These two new bottlings represent the third and fourth releases that are bonded – the previous ones include a four grain bourbon and a Secale rye.

“We are excited to release the final expression in our single grain series, which seeks to deconstruct our flagship Four Grain Bourbon,” said Laws Whiskey House founder Alan Laws in a prepared statement. “We look forward to continuing to elevate our offerings of American straight whiskeys while expanding to other states.”

Should you want to buy a bottle of either new bottled in bond expression, they will initially only be available in Colorado given their limited release status.

141
Shares
400
Views
Share on FacebookShare on TwitterGet Our Newsletter
Cheers to the Dads! Personalize a bottle of his favorite whiskey to create a modern gift for the modern man. Use code: FATHERSDAY20 for $20 off your next order of $100 or more at ReserveBar