As we draw closer to the annual Kentucky Derby horse race, it continues to be that time when we see bourbon releases tied to the event come out of Kentucky. First out of the gate was an Evan Williams offering related to the Derby Festival, and now it comes time for the annual Woodford Reserve bourbon bottling, complete with an artistic rendering on the front of racing horses.

The new Woodford Reserve 2020 Kentucky Derby release, according to those behind it, was painted by Louisville artist Richard Sullivan, a former Atlanta Braves baseball player. This is his first piece of work with Woodford – the last two years prior it was Keith Anderson, a Brown-Forman employee, who had the honor of doing it.  For Sullivan, he created a watercolor image of what is described as “thoroughbreds as they thunder toward the finish line, with the famed Twin Spires of Churchill Downs in the background.”

“My goal was to create a beautiful image of the Kentucky Derby that embodies the spirit of competition, dedication, and freedom that is required to be your best,” Sullivan said in a prepared statement. “I wanted to capture this intense moment of competition that is shared between the human and equine athlete. A moment when everything is on the line, time stops, awareness is heightened, mind and body are one, and anything is possible.” 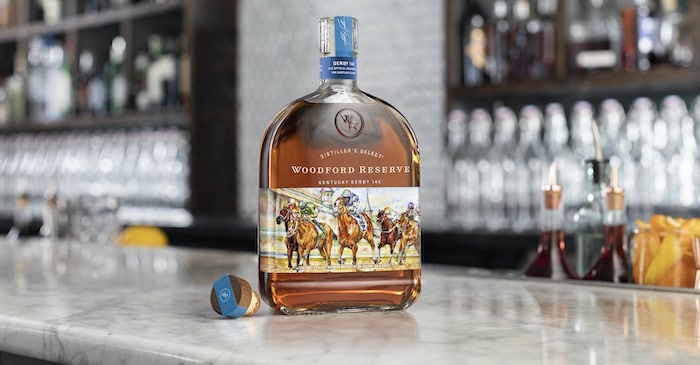 “There is a poetic beauty in this year’s bottle because Richard Sullivan, the human athlete, is celebrating the equine athlete,” added Woodford Reserve Master Distiller Chris Morris.

Sullivan played baseball at Savannah College of Art and Design (SCAD) and, in 2008, he was drafted by the Braves in the 11th round as a junior and played six years of minor league baseball. He returned to SCAD in 2014 to finish his degree and focus exclusively on his artwork.

His work is featured across the United States, including at The Atlanta Braves Truist Park, Mercedes Benz Stadium and the National Baseball Hall of Fame. He also recently collaborated with Topps trading cards to create a series of twenty paintings of rising MLB stars for the Momentum Rising set.

Plans call for the 1-liter bottles of this Woodford release to be on sale for around $50. It should be noted as well, according to Woodford Reserve, that “the Derby bottle has been an annual collector’s item anticipated by bourbon and racing fans since 1999.”