Jos A. Magnus & Co. is a relatively well known craft distillery out of the Washington D.C. area, highlighted primarily for finishing sourced whiskey in exotic barrels that once held sherry, cognac or armagnac. It is one of the projects as well that legendary master blender Nancy Fraley is involved in. Under this distillery exists, among other brands, the Murray Hill Club whiskey. Batch 3 of it has now been announced, and it takes a rather fascinating direction from previous releases.

The new Jos A. Magnus Murray Hill Club Special Release (Batch 3), according to those behind, is a marked departure from the first batch that blended 18 and 11-year-old bourbon with 9-year-old light whiskey (the second batch was finished in Pineau des Charentes casks). Instead what Fraley and company have cooked up this time is a blend of 10 to 20 year old bourbons that were finished in malt and cider casks first used by Potter’s Craft Cider, Buskey Cider and Virginia Distillery Company to create what’s described as “a unique and complex interplay of aromas and textures.”

More specifically, according to information provided to us by the distillery, the barrels were “first filled at the Virginia cideries of Potter’s Craft Cider and Buskey Cider. The casks spent a further 8 to 12 months at Virginia Distillery Company as finishing casks for their 100% barley malt blend of Scottish and Virginia whiskies. As expected, the barrels possessed an abundance of single malt barley notes and still retained a fair amount of apple aromas, skin tannins, and residual yeast from the original cider fills.” The blended bourbons then finished for 8 months in these casks.

The Murray Hill label, for those unfamiliar with it, was said to first have been introduced in 1892 and is reportedly “one of the finest whiskeys” to come to the market prior to Prohibition. What is in the bottle now “was created using blending techniques” from the Magnus era. Previous blends have netted some notable awards at various spirits competitions in recent years. 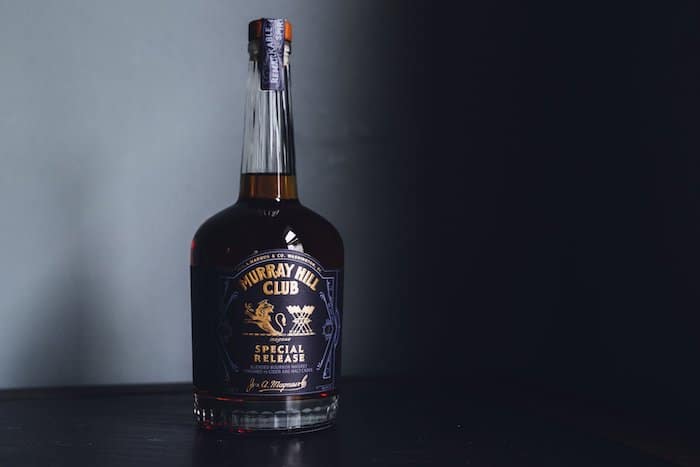 As it stands now this whiskey should be making its way to select retail outlets and restaurants nationwide. It is bottled at 55% ABV, and prices around $170 per 750 ml bottle. You’ll find official tasting notes for it below for your consideration.

It has aromas of creamy brown butter with cinnamon toast, vanilla shortbread, gingersnap cookie, and Italian biscotti drizzled with thick apple blossom honey. As the whiskey notes evolve in the glass, the floral and fruity top notes of apple blossom give way to deeper, darker shades of marzipan, pear tart, oatmeal raisin cookie, and caramel pudding with sea salt.

The whiskey finishes in a trio of waves of acidity, sweetness, apple skin tannins, barrel spice, and saline.

77
Shares
2.2k
Views
Share on FacebookShare on TwitterGet Our Newsletter
Cheers to the Dads! Personalize a bottle of his favorite whiskey to create a modern gift for the modern man. Use code: FATHERSDAY20 for $20 off your next order of $100 or more at ReserveBar