New Riff Distilling, based in Kentucky, is introducing for the holidays a new expression that’s described as being reminiscent of a chocolate oatmeal stout. Known as New Riff Winter Whiskey, it is a bourbon with a unique mash bill influenced by malts and oats that includes some chocolate malt.

The new New Riff Winter Whiskey, according to those behind it, is a Kentucky straight bourbon whiskey with a mash bill that’s 65% corn, 20% malted barley, 7% pale ale malt, 5% steel cut raw oats and 3% chocolate malt. It should be noted of the last ingredient that, despite the suggestion of chocolate in the grains — and in the name — Winter Whiskey never turns sweet or cloying, tending to delicate dryness. 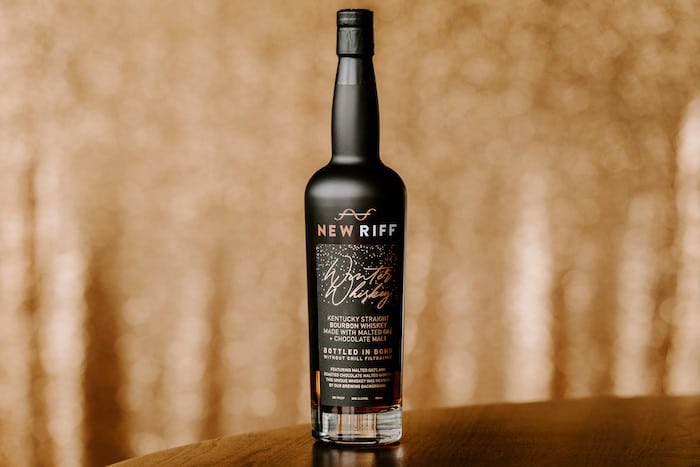 “When we considered putting oats in a bourbon, our minds went to the chocolate oatmeal stouts we enjoyed in our brewing careers,” said New Riff head distiller Brian Sprance in a prepared statement. “Our Winter Whiskey will warm your palate with the cheer and flavors of the season. It’s unlike anything we’ve ever made or tasted.”

Winter Whiskey is bottled in bond without chill filtration at 100 proof, and aged at least four years. It is pricing around $50 per 750 ml bottle. Limited official tasting notes suggest it “tastes like a conversation between the dry cocoa quality of the chocolate malt, a balanced amount of oak and a unique spicy quality distinct from that of rye. The finish dances away on the oaty spice, with hints of Belgian cocoa.”

Sprance, for the curious, originally worked for the Boston Brewing Company as a brewer for Sam Adams in Cincinnati. Rather than hire a distiller, New Riff founder Ken Lewis recruited Sprance — because Lewis knows “it is fermentation where a spirit’s flavors are created. He was trained by legendary distiller Larry Ebersold, who served as New Riff’s consulting master distiller.” It is said this new release “is a perfect example of how Sprance can marry brewing and distilling together.”