The New Riff Distilling distillery in northern Kentucky is a new whiskey making operation by Kentucky standards, having opened its doors back in 2014. Those who operate the stills here have patiently been waiting for their bourbon to come of age, determining only recently the now four-year-old brown spirit is ready for bottling and release.

The new New Riff Bourbon, according to those behind it, is a 100 proof, bottled-in-bond expression that was aged for four years and bottled without chill filtration. It is said to be a high rye bourbon (mash bill is 65% corn, 30% rye and 5% malted barley, all non-GMO), having been distilled by expert beer brewer-turned-distiller Brian Sprance and touched by water from the Ohio River Alluvial Aquifer, situated directly below the distillery. The water here flows at 500 gallons a minute, additionally yielding enormous energy savings by effectively cooling the mash and condenser coils without first requiring to be chilled. 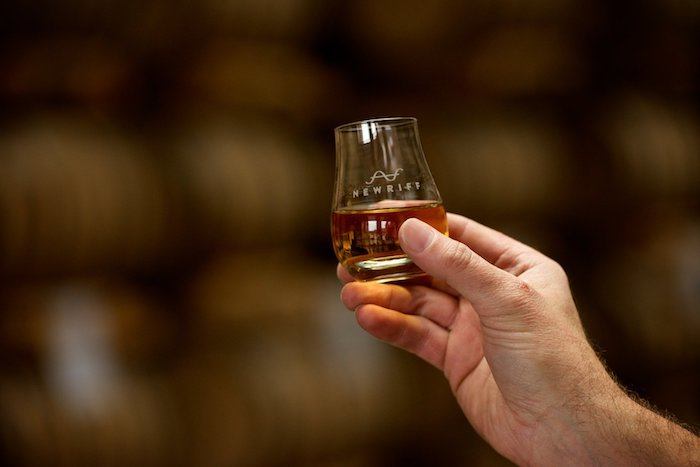 “At New Riff Distilling, we uphold the hallowed Kentucky Regimen with open fermentation, sour mashing and distillation on grain,” said Jay Erisman, Co-Founder and V.P. of Strategic Development, New Riff Distilling, in a prepared statement. “Our stills are all copper, from our 60-foot column still to our doubler, and the whiskey is aged exclusively in 53-gallon new oak barrels that are toasted and charred. New Riff Bourbon is truly a distillation of who we are as people.”

Plans call for New Riff Bourbon to be released this fall for around $40 a bottle. Limited official tasting notes suggest this whiskey “entices with an aroma of butterscotch that rounds into fresh oak, with hints of vanilla and rye spice. On the palate, its broad, fulsome mouthfeel leads to a sweeter vanilla accent, before a melding of clove, cinnamon, mint and dark berries. Its long, rye-led finish is replete with brambly red-black fruits amid white pepper and clove.”