The Kentucky distillery known as Jeptha Creed was founded a few years back by the mother-daughter duo Joyce and Autumn Nethery on 64 acres of farmland where they grow the Bloody Butcher corn that’s used as the base grain for all their products. The latest of these is a new four grain, two year old straight bourbon whiskey they recently released.

The new Jeptha Creed Straight 4-Grain Bourbon, according to those behind it, was barrel aged for two years, though it is also said the whiskey was six years in the making. It is a 49% ABV (98 proof) expression with a four grain mash bill that includes heirloom Bloody Butcher corn, malted rye, malted wheat and malted barley. 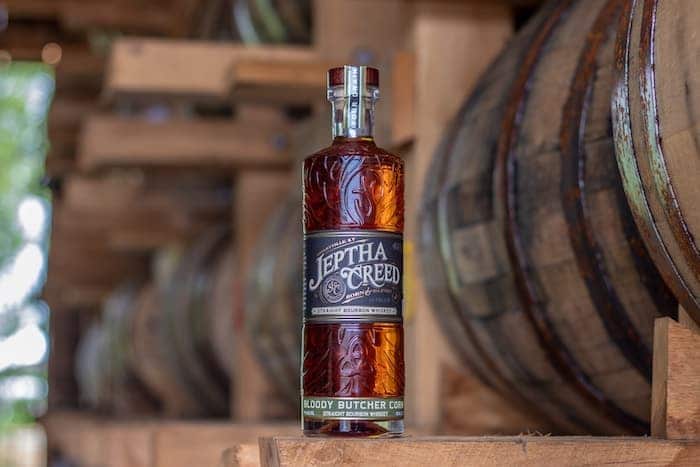 The Netherys, it is said, have been farming land in Shelby County, Kentucky, for some five generations. It is through these many years of raising crops that they’ve come to now grow or locally source the grains used in their spirits, including this new bourbon. Specifically, they always “wanted to be thoughtful about the corn that they used. They planted two fields: one of non-GMO yellow corn, and one of heirloom varietal Bloody Butcher corn. As the fields ripened, they noticed an intriguing behavior from the local wildlife: animals would walk through the yellow corn to eat the Bloody Butcher corn. The Netherys knew they had made a key discovery for the future of Jeptha Creed.

“In 2014, they distilled test batches of bourbon, hoping to test different grain levels for the mash. Due to a delivery accident, the rye, wheat, and barley all arrived malted. It was a lucky mistake: the Netherys tasted the bourbon made from the mash of malted grains and knew they’d landed on something special. It was also around this time that Jeptha Creed began to take shape in Shelbyville. In August of 2016, Jeptha Creed distilled and barreled the first legal barrel of bourbon in Shelby County since before Prohibition. By October of that year they had begun distilling in earnest, with two barrels of bourbon heading into the warehouse each day. In February of 2019, they barreled their one thousandth barrel of bourbon, and are now producing nine barrels per day.”

Given their local sourcing of grains, it would also make sense the bourbon, which is now available in Kentucky and soon Tennessee and Indiana, would also make use of water pulled from a creek on their farm. As for pricing of this whiskey, it is around $50. You’ll find some official tasting notes for it below for your consideration from the distillery.