It is getting so now we can’t seem to keep up with bourbon growth news out of Kentucky, and I don’t mean new bottlings being released. Rather, what I’m referring to, is the redevelopment and/or building of new distilleries and related facilities, sometimes right atop the remains of distilleries which once were. To date, just to name a few:

You can see what I mean, and these are simply the ones we know about in our short publishing history. And now, joining this list as of today, are two more ceremonial groundbreakings in Owensboro (TerrePURE Kentucky Distillers/Charles Medley Distillery) and Pikeville (Alltech/Dueling Barrels Brewing & Distilling).

The historic and current Charles Medley Distillery, which opened in Owensboro in 1936, produced whiskey until 1993 before falling on hard times (distilling at this location actually dates back 130 years or so). The facility was purchased last year by Terressentia, one of the rapid spirits aging companies, and setup as a new subsidiary known as TerrePURE Kentucky Distillers. Plans at this location call for a $25 million dollar overhaul and refurbishment that will, when completed, allow for a target goal of around 2 million proof gallons of bourbon production per year, along with likely some other whiskey products as well. Another number I’ve been seeing get batted around also is annual production of 30,000 barrels of bourbon and whiskey.

As far as aging goes here, this is where things get interesting. There will be apparently both rapid and traditional aging going on pretty much side by side at the distillery which, by the way, is being renamed to “the O.Z. Tyler Distillery in memory of the co-inventor of the TerrePURE distilling process.” What will be on site here will be the company’s rapid maturation technology and a whole lot of barrels as well (the 28 acre site is said to play host to seven aging warehouses, each with a 20,000 barrel capacity).

A rather fascinating placeholder website I found for this project has an “interview” posted with Earl Hewlette, the current CEO of TerrePURE, around the distillery and renovation plans I suggest you read. It is pretty lengthy though, so if you don’t have the time here some choice highlights to what’s planned to happen at the old Medley facility:

… We have begun the local hiring process and we anticipate adding approximately 50 to 75 jobs for the distillery operations once fully refurbished.

… We are now in the process of modernizing the distillery equipment, adding new grain storage, handling and milling equipment, new boilers, upgrading the still, adding additional fermentation tanks and upgrading the existing fermenters. We are modernizing the electrical systems and all controls. Additionally, there are a great many structural repairs being made to the rick houses and stillhouse. Finally, we are creating a TerrePURE processing facility and automated barrel filling and dumping stations.

… We will be producing bourbon exactly the same way as every other Kentucky distillery: fermenting grain, distilling it to concentrate the ethanol, then barrel aging it. We will then, however, utilize our patented, all natural process to rapidly mature some of the bourbon we make. Typically we use traditional barrel aging for about six months, then utilize our TerrePURE process to remove more of the unwanted minor alcohols than a barrel filters away over four years of aging.

… We currently process and bottle bourbon under numerous labels for national retailers, as well as sell tankers of bulk bourbon to bottlers outside of the United States. When this distillery is operational we will utilize Kentucky bourbon for those products, as well as launch our own brands of bourbon and rye whiskey, one of which will be branded O.Z. Tyler.

… We will be making many different bourbon profiles using different grain mash bills and different yeasts. We will also be aging bourbon for differing periods of time, some as little as six months, some more than four years, and some much longer.

On top of all of this, the O.Z. Tyler Distillery at some point may also be made into a tourist attraction via a so-called “visitor’s experience.” TerrePure is said to hold historic permit number, DSP-KY-10, which would further make this site a possible official stop off point along the famous Kentucky Bourbon Trail.

“From the first time we visited Owensboro, we have been impressed with the hospitality, progressive thought and passion of the community,” said Hewlette, in a statement. “We are delighted to play a part in restoring an historic distillery.”

Meanwhile, in Pikeville, Alltech broke ceremonial ground on its new Dueling Barrels Brewing & Distilling facility. This company, known to whiskey lovers for its Town Branch line, already has a distillery in Lexington, so it is interesting to see them setting up shop as well in another part of the state. 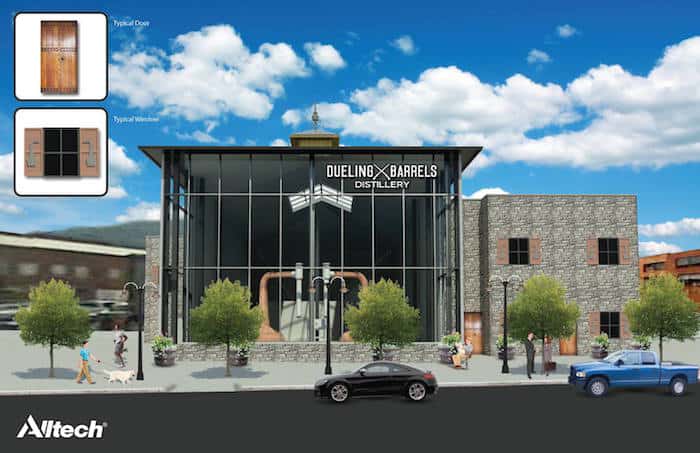 What’s going on at Dueling Barrels is a $13 million project which, when completed by 2017, will include “a visitor’s center that will celebrate Appalachian history and the role of moonshine.” Plans mentioned by Alltech on the distillery’s Facebook page indicate beer, moonshine and eventually bourbon will flow from here.

A news release put out by Alltech talks more about the theme behind this new facility, indicating the distillery’s name

was inspired by the notorious feuds between the Hatfields and McCoys, and is a double entendre with gun barrels and whiskey barrels. Dueling Barrels will feature tours of the brewery and distillery, beginning with a visit to a small theatre to view a video of what guests will experience. A tour of the distillery and brewhouse will follow, where the process will be explained in depth, and then will end with a visit to the tasting room where the products can be sampled.

As the building is going into downtown Pikeville, a “careful demolition” of the property which was onsite previously occurred earlier this year. Alltech said it is investing in eastern Kentucky because its founders “Pearse and Deirdre Lyons have an affinity for Eastern Kentucky, thanks to the region’s similarities with their native Ireland. They believe that by acting as a catalyst, others will follow suit as they bring new business to the area.”

“With Alltech’s global reach, it is expected that Dueling Barrels’ beer, whiskey and moonshine, all from Eastern Kentucky, will go to the global market by the end of next year,” said Dr. Pearse Lyons, president and founder of Alltech, in a statement. “It is also our hope that Dueling Barrels will extend the Kentucky Bourbon Trail into Eastern Kentucky, bringing visitors, tourism dollars and international publicity with it. If Dueling Barrels is added to the Kentucky Bourbon Trail tour by the Kentucky Distillers’ Association, it would become the first and only stop east of Lexington.”

All total, and head spinning aside, it is increasingly good news for both Kentucky and bourbon lovers to see all of the expansion happening in that state. I think I’ll now go enjoy a glass of bourbon to celebrate.

157
Shares
645
Views
Share on FacebookShare on TwitterGet Our Newsletter
Get The Glenlivet 18 Year Old at ReserveBar. Shop now!