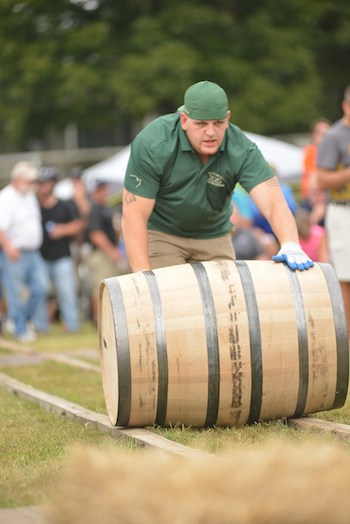 To hear old-timers talk about the very first Kentucky Bourbon Festival in 1991, you’d never think it was the same event that now draws 50,000 visitors to a small town like Bardstown, Kentucky—home to 13,000.

In a recent interview I had with Jimmy Russell, Wild Turkey master distiller, he described what basically was a humble garden party during the day, followed by a sit-down dinner that night.

“It was basically some distilleries with card tables and tents set up outside, and all we had were whiskey samples to hand out,” Russell said. “The crowd was so small, the master distillers were going to each other’s tables and talking. Sometimes we were the only ones drinking the samples, too.”

Dawn Pryzstal, executive vice president of tourism in Nelson County (home not only to Bardstown but to 69% of the world’s bourbon production) and also a Festival board member, said the growth of the Festival has happened rapidly in the past 10 years.

“It used to be that it would take a while, maybe even until the day of an event to sell it out, but now those events like the Gala and the All-Star Sampler are selling out way in advance,” Pryzstal said. “Those tickets are going to people coming from 38 states and 14 foreign countries. Bourbon’s big everywhere, but the best party of the year is here.”

Were you to come, here’s just a short list of events that are worth checking out if you can get tickets:

Brand new this year is the 1792 Flights of Bourbon (a bourbon and cocktail sipping event) held outdoors at Samuel’s Field Airport, and Bottled-In-Bond-Fire, billed as a casual and less-expensive alternative to the black-tie gala. Also outside, attendees will find stations serving Bottled-In-Bond whiskeys around campfires.

“If I had the time—no to mention the energy—after the Gala, I’d really want to go see Bottled in Bond-Fire,” Pryzstal said. “It’s a pretty hectic week for me, so I don’t get to do everything I want to. I have to ask others how fun all these events are.”

In case you want to see what to try next year, here’s this year’s complete event schedule.

One of the best ways to enjoy the Festival is to not even go to it. Seriously. You could just roll into Bardstown on Friday or Saturday night, enjoy the crowds and restaurant and bar hop in its charming downtown. In 2012, Rand McNally and USA Today named Bardstown the “Most Beautiful Small Town in America” for good reason. It is lovely and historic, and the people are friendly. It’s even more fun with the energy brought in by festival goers.

For non-Kentuckians reading this, it’s easiest to get to Bardstown via Louisville. Once there, it’s about a 45-minute drive to the festival. If you’re driving, it’s not far off I-65, and the drive takes you past Jim Beam’s Clermont distillery, which is very cool to see. Once you get to Bardstown, just park on the streets and walk. Everything is close together and easy to get to.