The Boot Hill Distillery, located in Dodge City, Kansas, is said to be unique in its region for being one of the only local distilleries to have “complete control over the entire distilling process; from the moment seeds are planted, to bottles being filled.” This is because, in part, one of its owners grows the grains they use to distill spirits with on his own farms.  It is this grain to glass philosophy that’s now being reflected in the release of their first ever bourbon.

The new Boot Hill Distillery Bourbon, according to those behind it, has been aging in new 53 gallon American White Oak barrels since January of 2017. In a little over 2 years, it is said, “Kansas’s hot, dry, windy climate and wild temperature swings have been particularly beneficial to the aging process.” The bourbon’s mash bill consists of 51% corn and 49% hard red winter wheat, reportedly giving “a certain softness and sweetness to the finish of the bourbon.”

As it stands now plans call for this 90 proof bourbon to be available at the distillery now, and more widely available come the fall. Boot Hill currently distributes its other spirits, which include vodka, gin, two younger whiskies, and an amaro, across eight states. An experimental series also was introduced only in the distillery’s tasting room, which included a very small batch bourbon, a wheat whiskey, and a barrel aged gin. 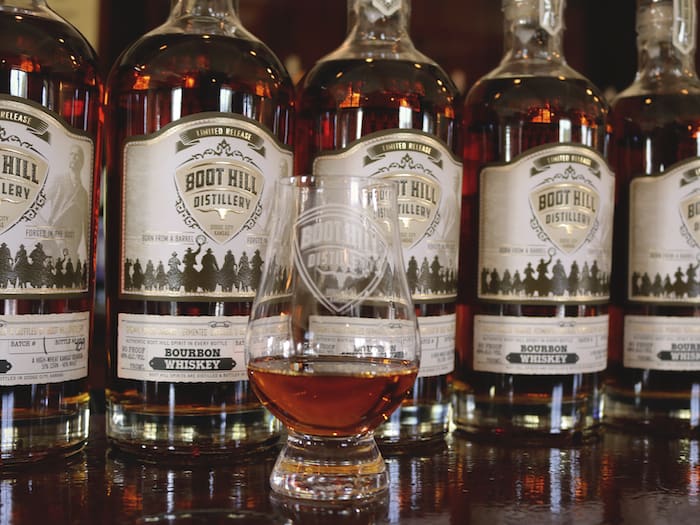 Those trying to find this bourbon on store shelves will want to be on the lookout for a label that “elicits images of the old west, including a silhouette of cowboys driving steers and the image of a statue of Wyatt Earp, Dodge City’s most famous lawman, both historical landmarks in Dodge City.” The distillery itself, for the curious, is housed in a historic city municipal building that held city services beginning in 1929. Prior to this, in the 1870s, the site was the original location of Boot Hill Cemetery, where outlaws and unknowns were buried.