Global demand for whiskey has allowed for what’s said to be an accelerated pace for the creation of American bourbon, and the distillers at Jim Beam have found this milestone holds the special significance of being achieved against the backdrop of a global pandemic.

Through the various disruptions and implementation of new protocols to protect the health and wellbeing of employees, Beam was able to keep what they felt was a strong pace of production. 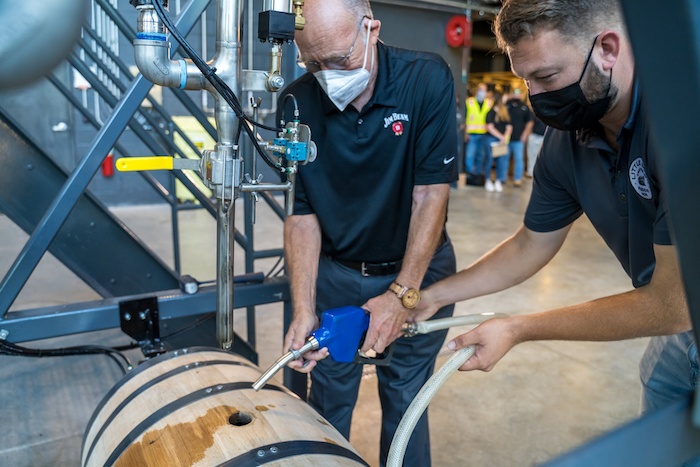 “Throughout this pandemic, our incredible teams kept coming in to work every day, to make the bourbon that consumers around the world are going to enjoy in about four years,” said Freddie Noe, eighth generation Beam Distiller, in a prepared statement. “They adjusted to new workplace protocols that kept them, their colleagues and our operations safe. And they did this while caring for loved ones at home.”

Noe said they’ve been fortunate to celebrate a lot of milestone fills at the James B. Beam Distilling Company, but the 17 millionth barrel is quite special, “and we’re dedicating this barrel to our teams who have distilled, barreled, bottled and shipped our brands day in and day out for our consumers.”

In addition to making and filling a million barrels of bourbon during the pandemic, Jim Beam and local Beam Suntory teams also made hand sanitizer at the onset of the crisis, ultimately creating more than 40,000 gallons, which was donated to first responders and healthcare workers, as well as local municipalities and organizations in the community.

“Congratulations to the James B Beam Distilling Co. on this impressive milestone. Kentucky is bourbon’s birthplace, and it remains an important part of our heritage and economy, providing more than 20,000 quality jobs in the commonwealth,” said Kentucky Governor Andy Beshear. “Jim Beam’s 17th million bourbon barrel shows that our spirits industry continues to grow at an incredible rate.”

Fred Noe added, “The passion and dedication of our people who make bourbon the Beam way is unsurpassed. Throughout the pandemic, we’ve seen just how devoted our people really are. We’re raising a glass to them today. It’s an honor!”