Remember about a week or so ago when we brought you word of three new distilleries joining the Kentucky Distillers’ Association (KDA), to bring its membership numbers to 31? Turns out the KDA wasn’t done indoctrinating distilleries into its ranks, as now two more have been added in what has amounted to a watershed month for that state’s liquor trade group.

Coming on board as the 32nd member is Jeptha Creek. Said to be the first distillery in Shelby County since Prohibition, the 64-acre property will open to the public later this year. It includes  a distillery, farm, a visitor center, and an event space available for rentals. 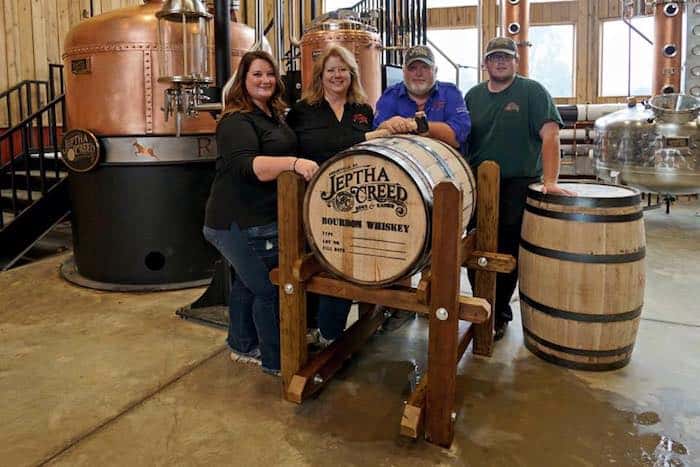 Plans for whiskey from this family-run operation include “three different bourbons made with heirloom Bloody Butcher Corn – a corn variety that, when dried, turns a deep red color and adds a sweetness to the product.”

“We are honored and blessed to be able to join such a prestigious organization,” said Jeptha Creek co-founder Joyce Nethery in a prepared statement. “We look forward to living up to the KDA’s standards.”

Joining Nethery’s distillery, and coming in as the KDA’s 33rd member, is the new Wadelyn Ranch Distillery in Lincoln County. It was founded in 2013 by Thomas Wade Daniels, a sixth generation distiller, and was created with “family traditions” in mind. Wadelyn produces aged whiskey, brandy and Kentucky white lightening.

“It’s good to be part of such a distinguished group,” added Daniels. “I look forward to sharing stories, knowledge and historical moments with members in the coming years. I’m excited to start meeting with other members and grow with them in the Bourbon industry.”

Shares
275
Views
Share on FacebookShare on TwitterGet Our Newsletter
Get The Macallan® Rare Cask at ReserveBar. Shop now!