Is a Bulleit Bourbon Barrel Strength Version on the Way?

The TTB Public COLA database, where federally approved liquor label bottles appear online, can be a a great way to learn about what’s on the mind of distillers and whiskey brands. Take, for example, last year’s appearance of the John E. Fitzgerald Very Special Reserve label months before the actual release of the 20 year old Stitzel-Weller bourbon from Heaven Hill. Now, a new possible bottling has appeared which will be exciting to fans of Bulleit Bourbon – a barrel proof version.

Now, before I go any further, let me first say this – labels that appear in the TTB approval database aren’t necessarily items which will ever appear at retail. They could just be reflections of projects a particular brand is thinking about.

That being said, here’s what we know. The label, as you can see above, is for a Barrel Strength Bulleit Bourbon edition. This release, which would clock in (theoretically) at 59.7% ABV/119.4 proof,  versus 45% ABV/90 proof for the standard bottling, is described as a limited-edition offering that’s “bottled by” Bulleit. This means it continues Bulleit’s position as a non-distiller producer. Not that fans of Bulleit likely care all that much about it anyhow.

Bulleit describes this release on the proposed label as follows:

Out of the barrel, uncut and unfiltered, this whiskey delivers unrivaled boldness and complexity. I’ve reserved select barrels to be bottled at true barrel strength to offer you this unique and distinctive release of my straight bourbon whiskey.

The above is signed by Tom Bulleit, the man behind the brand that’s owned by Diageo. It is not clear from the limited information if this would be a distillery-only release, or something destined for greater retail distribution. 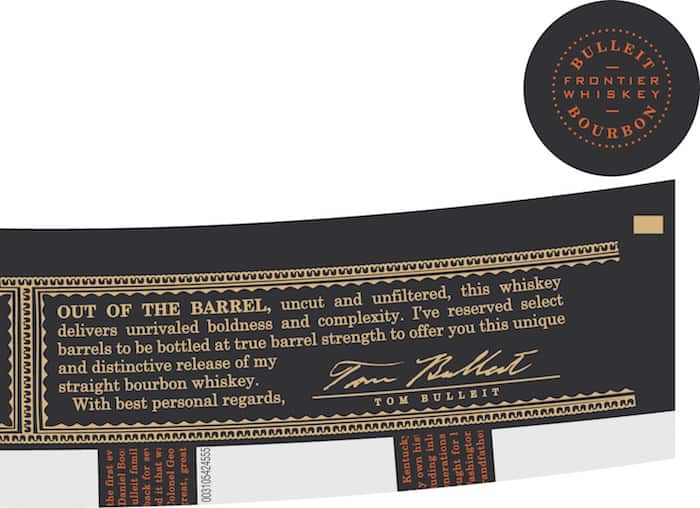 We’ve reached out to Diageo for comment on this possible release (SEE QUOTE BELOW FROM DIAGEO) . If you just have to know – right now – what they are saying, a recently opened discussion thread over at reddit offers a little more insight into the possibilities. I’m not quoting it here because we don’t have word one way or the other and I don’t want to steal the thunder from the folks talking about it.

UPDATE – a PR representative of Diageo’s just provided us this quote:

We are always listening to our consumers and partners in the trade about what they’d like to see next from the Bulleit brand. This is a project we’re considering as a potential future release. No final decisions have been made, but as soon as we have additional details to share, we’ll be sure you’re among the first to know.