Interview: Nosing Your Bourbon With The Bourbon Nosing Kit

You could say Chris Walters “nose” his bourbon. In fact, he’s turned a curiosity with the smells and tastes of whiskey into a side hustle, and now a full-fledged business.

Walters’ “Bourbon Nosing Kit” is designed to help train your nose to find the nuances in bourbon. And that’s what drew many interested folks to the product when it first appeared in his Etsy shop and on various internet bourbon groups.

But it’s also designed for affordability, and can be a good tool for those starting out in bourbon collecting or if funds are tight. “Don’t think you have to chase every limited release or even store pick bottle out there,” Walters said. “There are so many great bottles that sit on shelves every day under $60, Wild Turkey Rare Breed, Old Forester 1920, and Four Roses Small Batch Select to name a few.”

He said to just pick up a few bottles from different distilleries and taste them blind. “Then as you start to determine what profiles or mashbills you’re drawn to, you’ll have a better sense of what bottles to pick up next.”

That’s where the Bourbon Nosing Kit comes in. 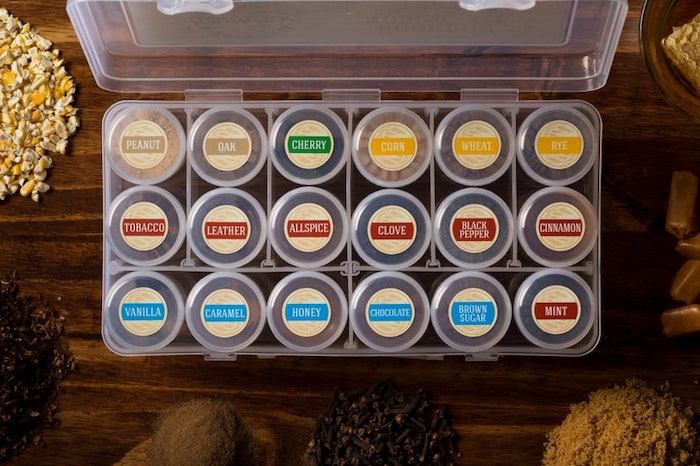 Back in 2015, when Walters was in college, he was looking for something to pour straight out of the bottle, something to sip and enjoy. But he struggled to find just what he liked. “I wasn’t sure if what I was tasting was what all whiskey tasted like,” he said. So he swore it off for a while.

He came back to whiskey when he was intrigued by Bulleit Bourbon’s packaging. “I said to myself, there’s a story there. And when I tried it, I found it to be sweet, oaky, caramel … it gave me the whole thing.”

From there, his bourbon collection started to grow. And so did his family unit, getting married and having children. Yet his bourbon hobby held strong. “Actually, my wife called me a hobby jumper, I would just go all in on something.”

He read everything he could get his hands on regarding bourbon. He would review bottles with his friends and compare tasting notes. But one thing he said he noticed, “I was rarely getting the smells and tastes that writers would say they got. I thought, ‘are they just full of it?’”

But his friend Seth Brown could pick up the notes the distillers were putting down. “He told me to start with the spice cabinet, spend some time in there smelling the ingredients. See what smells jump out of the glass (of bourbon).”

In his work life, Walters was in the photography business, weddings and such. He was familiar with Facebook groups and commerce via social media. He was going to use his skills to put together a kind of spice kit for bourbon smells, a nosing kit as it’s known in the business.

Nosing kits have been around for a long, long time. Most just have a few of the basic smells like grains and wood. Nearly all are hundreds of dollars.

For Walters, he found there were at least 18 different smells that were integral to his nosing kit. Then, he had to find the right packaging. If he was going to be mailing these out to folks, he wanted the smells to be fresh when they got them.

“I finally found the right packaging, it really was about finding the perfect containers,” he said. Then came the research.

He found that 75 percent of the time, when reviewed, bourbon tasters identified caramel, corn, honey, wheat and rye. Those made it into his kit. Other grains, wood, and spices followed.

His research also turned up interest in Facebook groups seeking out nosing kits for their tasting nights and for those doing high-end flights. “Nationally, we were seeing a market for this, people were seeing the giftability of it.”

Christmas and Father’s Day, the orders racked up. From one off orders on Facebook, to his Etsy page, Walters was putting together hundreds of the kits. And today, he has expanded to the web site www.noseyourbourbon.com.

Recently, he added a second, expanded kit for nosing bourbon. The expansion kit features scents less common and harder to find. “We stepped up the fruit game, rose, hibiscus, the coconut on the nose of a toasted barrel.” Even dill that you might find in some ryes or the peanut smells from Jim Beam and Booker’s.

In the original kit, vanilla beans are a star. Walters said they are quite expensive and hard to source, but he found just the right ones that keep the longest. Same with orange and lemon peel, he wanted to get just the right product that wouldn’t break down. Dried cherries, cracked corn … “they all smell just like the real thing.”

What you get from a nosing kit is a connection to sensory memories. “Everyone is smelling when they’re tasting their bourbon,” Walters said.

His advice? With your nosing kit by your side, pour an ounce of your favorite bourbon and let it sit for five or ten minutes. Let some of that alcohol vapor burn off. And when you sip, do so with your mouth slightly open, nose the spice. Nose the sweet.”