How to Host Your Own Bourbon Salon

The concept of a Salon was born of philosophical and literary movements in the 17th century. Traditionally, a host comes up with a given topic and invites people to engage in a discussion. Salons lost their popularity with the invention of electricity, televisions, and radios as more popular means of communication, but the concept is still very useful. Bourbon Historian Michael Veach has put on a Salon for The Filson Historical Society about six times a year in previous years to discuss various bourbon-related topics.

At the most recent Bourbon Salon at Oxmoor Farm, Michael Veach hosted a panel of women distillers. Panelists were Marianne Barnes of Castle and Key, Pam Heilmann of Michter’s Distillery, and Lisa Wicker of Starlight Distillery. Topics discussed included the burden of paperwork for distilleries, which can be even more burdensome at a small operation where there isn’t a separate department to deal with it. Pam Heilmann worked at Jim Beam before joining Michter’s, and she remarked how different it was going from being a plant manager where everyone did their specific job to now a much smaller operation where everyone has to pitch in. 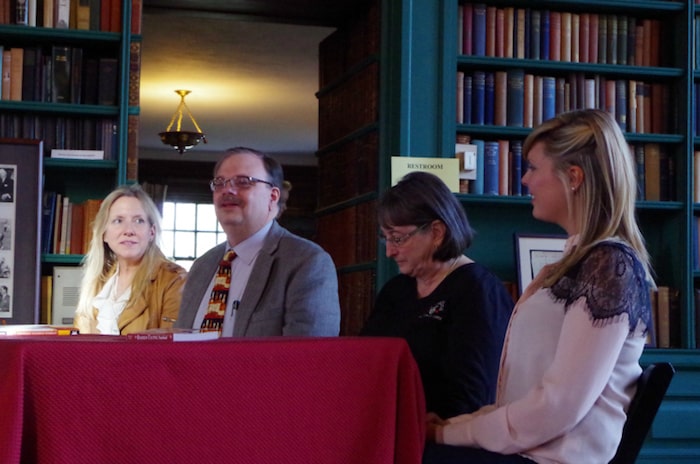 Lisa Wicker started her career as a winemaker, developing a friendship with Steve Beam after moving to Kentucky. “He had a building and no permit and I had a permit and no building,” she laughed. She eventually went to work for him at Limestone Branch as the distiller, and moved on to become the head distiller at Starlight Distillery after Luxco bought into Limestone Branch.

Marianne Barnes is elbow-deep in restoring the former Old Taylor distillery to modern glory. She recounted the heartbreaking story of hiring a yeast specialist, digging through the old pipes to find dried mash, and sending away a sample to be propagated only to discover it was a wild Icelandic yeast not suitable for distilling.

The topic of the next Bourbon Salon at Oxmoor Farm in Louisville, Kentucky, will be Single Barrel Selections with Party Mart’s Bourbon Board of Directors. Even if you can’t make this event, you can host your own Bourbon Salon at home with an interesting topic of discussion and a good bottle of bourbon. Invite some friends, prepare some questions on a chosen topic, and have a great time.