Times have been busy this year for the folks at Buffalo Trace, there is no doubt. A large portion of its growth has been centered around refurbishing and expansion of its historic distillery campus in Frankfort, Kentucky, with the latest move in this regard being the completion of its new “technically advanced” distribution center.

Buffalo Trace said in a news release this week its new 83,000 square foot distribution center, artistically designed in keeping with the existing look and feel of the existing buildings on the 224-year-old complex,  uses satellite technology to store and retrieve pallets of finished goods. It is believed to be the first spirits supplier to use this system, called an automated storage and retrieval system (AS/RS). 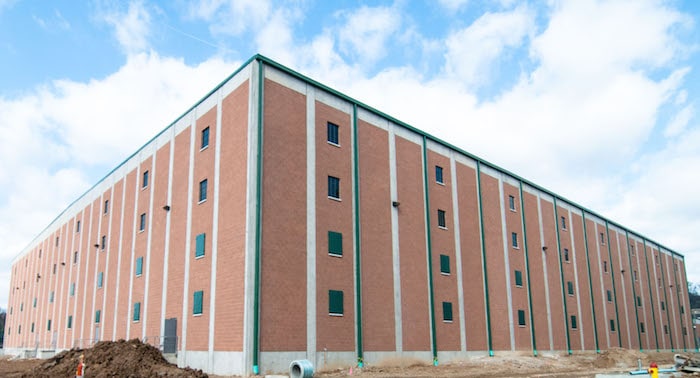 The AS/RS technology, which you can see in action in a brief video at the end of this story,

contains three storage and retrieval machines (or cranes) which operate in three aisles, serving storage lanes five deep, and storing pallets six levels high.  The cranes are each wrapped in Buffalo Trace’s logo, and have been named Albert, George, and Edmund in honor of Buffalo Trace’s founding fathers, Albert Blanton, George T. Stagg and Edmund Haynes (or “E. H.”) Taylor. Each crane can induct/output 55 pallets of finished goods per hour or a total of 165 pallets moving within the system. The AS/RS contains 20 pallet staging lanes which can hold 180 total pallets.

This $20 million investment, as mentioned before, is just the latest construction project Buffalo Trace has completed on site in recent times. Some of the previous projects include, in early July, a 5,500 square foot expansion of its visitor center, which contained event space and four tasting bars and also the opening of its refurbished Old Taylor House, which dates back to the late 1700s and is the oldest residential property in the surround county.