Hot on the heels of a massive boxed set released in 2019 to honor the 40th anniversary of Ace of Spades, the fourth album by heavy rockers Motörhead, Hillrock Estate Distillery are continuing the celebration with the recent release of a limited batch of cask strength Solera Aged Bourbon Whiskey decorated with the band’s official logo and packaged in a bespoke Ace of Spades gift box.

This short-run release of 1,100 total bottles was culled from two separate Oloroso Sherry casks, which, according to Hillrock, give this bourbon “floral notes layered with fig, roasted walnuts, candied fruit, and spicy rye.” The first cask was bottled at 115.6ᵒ and limited to 599 bottles, ABV of 57.8% while the second was bottled at 115.3ᵒ and is limited to 623 bottles, ABV 57.65%. 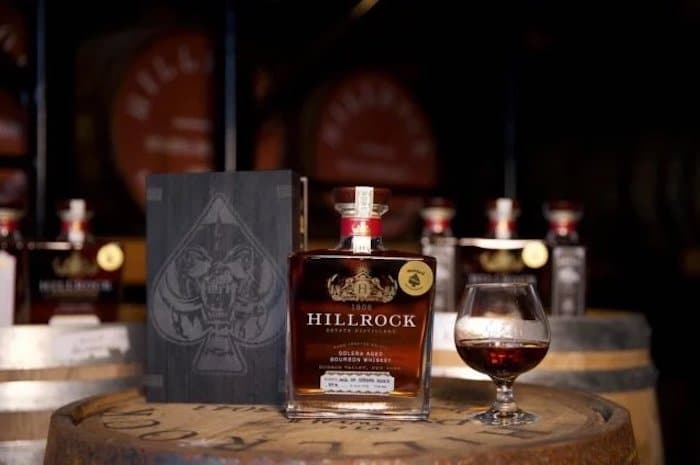 Hillrock Distillery partnered on this project with Global Brews, a company that has been connecting heavy rock bands with beer and spirit brands. Their work has included the release of Scorpions Rock n Roll Star Single Malt whisky, which brought together heavy metal icons Scorpions with Swedish distillers Mackmyra. The company has worked a lot with Motörhead over the years, resulting in a series of branded beers, wine, and a few whiskey releases, including Swedish distillers Götene Vin & Spritfabrik’s Iron Fist American Whiskey, named for the band’s 1982 album.

While this new bottle from Hillrock will surely be a must have for any hard rock fan’s home bar, ironically, Lemmy, the notoriously gruff leader of Motörhead who passed away in December of 2015, wouldn’t have chosen to drink it. According to an interview with The Guardian, he chose to forego his usual tipple of Jack Daniels and Coke in favor of vodka and orange juice toward the end of his life.

Even without the Motörhead branding, Hillrock’s Solera Aged Bourbon Whiskey is surely a familiar name for whiskey enthusiasts. The spirit has racked up multiple awards over the years, earning a Double Gold from The Fifty Best this year and being named one of the Top 50 Spirits for 2013 by Wine Enthusiast.