Called the “777 Blend” in tribute to the company’s casino resorts, the limited-edition whiskey is said to be an extension of the ongoing collaboration between Bob Dylan (Heaven’s Door co-creator) and MGM National Harbor, which currently houses one of his custom art pieces.

The whiskey is now available at the Maryland resort and at MGM Resorts’ Las Vegas properties including the Bellagio, ARIA, MGM Grand, Park MGM, Mandalay Bay and The Mirage. 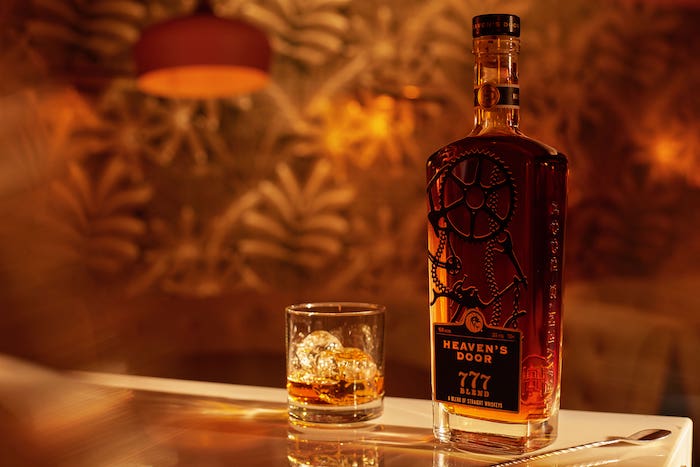 The new blend is presented in the brand’s signature glass bottle, and the label art showcases “Portal,” the sculpted iron archway designed by Dylan exclusively for MGM National Harbor. The 26-foot by 15-foot custom piece decorates the west casino entrance as part of an art program that showcases commissioned and procured works by local and international sculptors, photographers and mixed-media artists.

“This partnership is a natural continuation and celebration of Bob Dylan’s ‘Portal’ gate at MGM National Harbor, and we’re honored to have collaborated with their team to bring this new offering to life,” said Heaven’s Door Master Blender Ryan Perry in a prepared statement. “We’re bringing fans an exclusive new whiskey that’s a true representative of our brand’s dedication to celebrating music, whiskey and art and look forward to continuing crafting new liquids and forging unique partnerships that give them an experience you can’t find elsewhere.”

MGM Resorts Chief Hospitality Officer Ari Kastrati said this collaboration provides guests, as well as fans and followers of Heaven’s Door, a “once-in-a-lifetime opportunity to taste a rare blend made with Mr. Dylan’s exceptional whiskey collection and it has been an absolute pleasure.”

More official information on the 777 Blend, including tasting notes, can be found below.