The new Great Jones Distilling Co. was under construction for six years and boasts a 28,000 square-foot space which includes a custom-built and engineered distillery. The whiskey making operations offers tours and tasting experiences, as well as a restaurant, speakeasy and event venue, which are set to open in this month.

It was founded by Proximo Spirits through what’s said to be the vision of owner and 11th generation spirits maker Juan Domingo Beckmann. 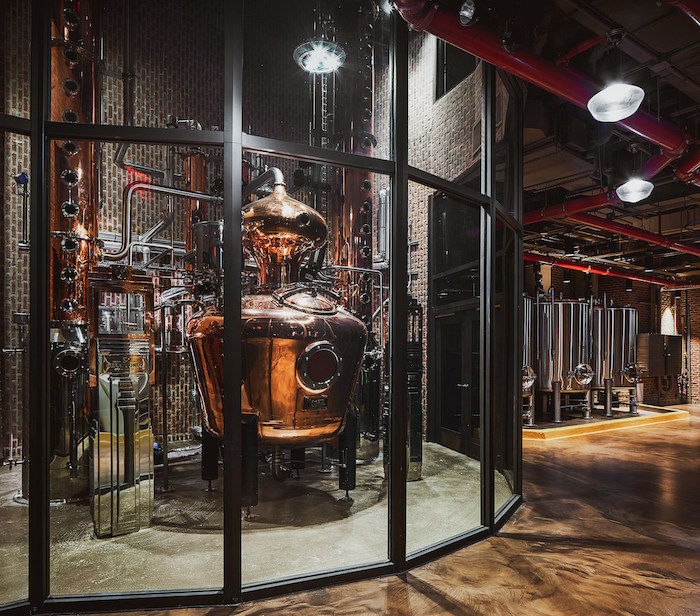 The distillery’s whiskeys are made exclusively with grains grown in the Black Dirt region less than 2 hours north of Manhattan in Upstate New York. Great Jones Whiskies are characterized by the brand as being smooth, balanced and complex, with a distinctive spiciness from of the New York-grown grains they are made from.

“The opening of Great Jones Distilling Co. represents a landmark moment for spirits and New York City history, bringing the craft of whiskey distillation back to Manhattan after 100 years,” said Beckmann in a prepared statement. “For 11 generations my family has crafted some of the world’s leading spirits, and we are proud to introduce a bourbon that truly embodies the best of New York State ingredients and the ‘lightning in a bottle’ energy of Manhattan. The Great Jones Distillery will give the city a new spirits legacy, and is dedicated to the resiliency and hustle that New Yorkers have shown to the world over this past year.”

The distillery brings three new whiskeys to its opening – Great Jones Straight Bourbon, Great Jones Four Grain Bourbon and Great Jones Rye Whiskey – that have been aging for the past five years in new charred American oak barrels in upstate New York in preparation for the distillery opening.

“As New York City enters a new era of hospitality and entertainment, the experience at Great Jones Distilling Co. brings renewed energy and employment opportunities to the NoHo neighborhood,” said Mike Keyes, President & Chief Executive Officer of Proximo Spirits. “Great Jones Distilling Co. will create more than 100 new jobs, supporting the much needed recovery and resurgence of the hospitality industry. We look forward to opening our doors this summer to New Yorkers and tourists looking for unique ways to enjoy time together again.”

Interestingly, the part of the city where the distillery is located, noted the brand, has a rich Prohibition era history. The 82 year old building it is housed in “had to be reinforced deep below ground to support the custom combination copper pot still with two columns housed on the second floor, navigating the subway system that runs below the building. During the renovation, a secret tunnel was discovered, thought to be used to transport whiskey and other spirits under the streets of New York. This tunnel now runs directly behind the speakeasy set to open this fall.”

More details on each whiskey, including official tasting notes, are below.