Getting Up Close And Personal With Kentucky’s Bourbon Distillers

This bourbon lover’s dream bar becomes a reality for one evening every September in Bardstown, Ky., at the midpoint of the annual Kentucky Bourbon Festival. The Kentucky Bourbon All-Star Sampler (held this year on Sept. 14) brings master bourbon distillers from all of the Kentucky Distillers Association’s large member distilleries, as well as those from many craft distilleries, together under one roof. For $75 per person, enthusiasts enjoy bourbon, cocktails and Kentucky cuisine and chat with their favorite distillers, snap pictures and secure an autograph or two—or 10.

“A lot of people bring things in to be signed, and it doesn’t matter what distillery [it’s from], they have everybody sign it,” said Charlie Downs, master distiller at Heaven Hill’s Evan Williams Bourbon Experience, a micro-distillery on Louisville’s Whiskey Row. “They might be a Maker’s Mark fan, or a Wild Turkey fan, but they bring it around and have everybody sign it so they can go back and say, ‘Yes, I know this guy. I know this master distiller—I drank some bourbon with him.’” 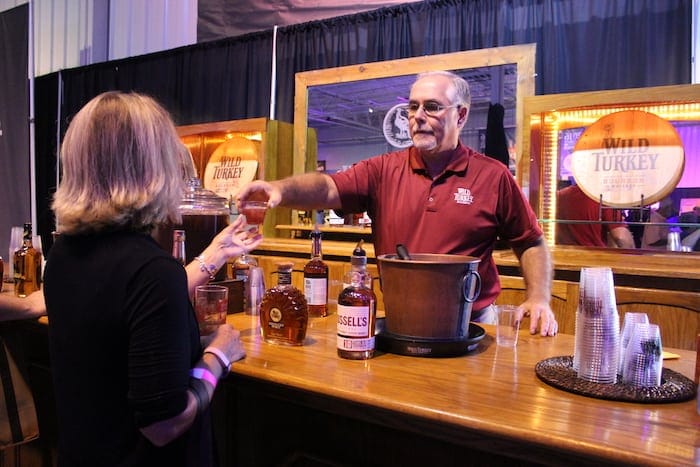 That was the case for Jack and Shelleyanne Rein of Southern California, who were toting a blank barrelhead around to each distillery’s display for autographs. This was their third Bourbon Festival but their first All-Star Sampler.

“We heard about this, and we wanted to meet all the people,” Shelleyanne said. “I’ve been wanting to get a really distinctive barrel head for a long time,” Jack added. “I knew that if I could get everyone to sign it and date it, I would have a little piece of history.”

This year marked the 25th anniversary of the Kentucky Bourbon Festival, which began as a bourbon tasting and dinner under a tent on a golf course. From that one event on that one night, the Festival has expanded to seven days and more than 40 events, said Jill Hawkins, its executive director. The offerings range from a balloon glow and a barrel relay to the Great Kentucky Bourbon Tasting & Gala, a formal dinner and dance where the master distillers again appear, only this time in tuxes.

But the Sampler, which began in 2010, is a favorite of both the fans—all 550 tickets were quickly snapped up—and the distillers.

“This is more casual, more laid-back,” Fred Noe said. “The Gala is a little more expensive; this is more grassroots. People have access to all of us. I think it’s important to thank the people who are supporting our products, and everyone here thinks the same thing.”

Fans also bring more items to be autographed to the All-Star Sampler than they do to the Gala, Noe said—everything from posters to barrel staves. 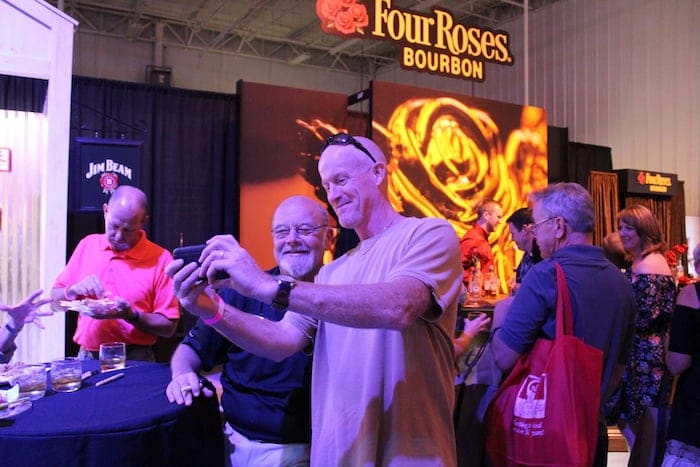 “It’s empty,” he noted. “I’m going to put it on my bar. Everyone has the posters, and I had a poster the first time I came, but I’m doing something different this year. This is a conversation piece that will last forever.”

He said the All-Star Sampler is the only Kentucky Bourbon Festival event he attends, before adding, “This is the best one.”

I asked legendary master distiller Jimmy Russell, who was relaxing next to the Wild Turkey bar while his son Eddie poured tastes, to name the most unusual thing he’s ever been asked to sign. He gave me a grin that managed to be sly and bashful at all once and replied, “I can’t say!”

“I said, ‘No, I will not.’ So I’ve never gone there,” Morris said. But he’s signed just about everything else. “Baseball bats, napkins, any type of paraphernalia. The most difficult and awkward thing to sign are drinking glasses. They are always smudgy—and they might have a liquid in them!”

To view all this hero worship, you would never guess that in the Festival’s early years, organizers had to dream up extra incentives, like collector cards, to boost attendance, said Larry Kass, director of trade relations for Heaven Hill.

“But now that bourbon’s hot, you just say the master distillers are going to be somewhere and people are breaking down the doors,” Kass said.

And an increasing number of those people are young people, said Downs.

“Years ago, it was just us old fogies,” said Downs, a Heaven Hill distiller for some four decades. “Nowadays you see a lot of mixed-aged groups.”

Aside from the Sampler and the Gala, he said, he and the other Heaven Hill master distillers, Craig Beam and Denny Potter, take turns attending the many Festival events.

“It’s growing—there are a lot more events and things to go to,” Downs said. “We try to spread it out so we can last the whole week.”

At the end of the week, Jimmy Russell and his wife, Joretta, were loading luggage into their car outside the Hampton Inn Bardstown as they prepared to drive back home to Lawrenceburg.

“How many of these festivals have you attended?” an observer asked Jimmy. “Twenty-five,” he said. “But I think this will be my last one.”

Joretta, who was heaving a bag into the trunk, looked up at that and said drily, “I doubt it.”

Shares
129
Views
Share on FacebookShare on TwitterGet Our Newsletter
Get The Macallan® Rare Cask at ReserveBar. Shop now!