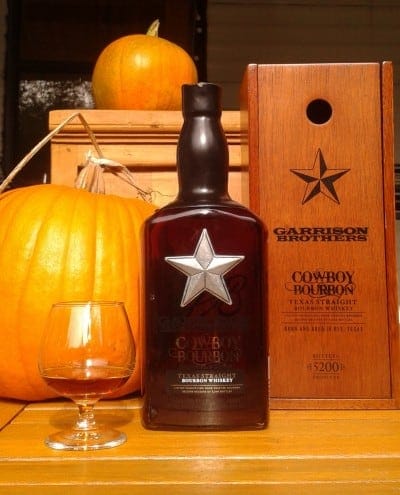 Editor’s Note: This review sample was pulled from the personal collection of The Whiskey Wash’s founder.

Garrison Brothers is, according to their own sources, “the first and oldest” distillery in Texas.  The bourbon produced from this company is typically released twice a year and is a popular offering in craft whiskey lover circles. Of much rarer consideration is their recently unveiled Cowboy Bourbon, a high octane offering that is now in its second release cycle after a few years of hiatus.

Originally released in 2013 with only 600 bottles, this second release has aged longer, and will be slightly larger, at 5200 bottles. The first batch was well received by reviewers, particularly in the 2014 edition of Jim Murray’s Whiskey Bible. The famous whiskey writer at that time named Cowboy Bourbon his choice for “American Micro Whiskey of the Year.”

As for the newer iteration, my bottle had all the information a whiskeyphile could want hand written on the side to know about its mash bill:  Made from 100% #1 Panhandle Yellow Dent corn harvested in 2009, the whiskey was distilled and barreled in the same year.  Aged four years in oak barrels made especially for the difficult Texas climate, my bottle was filled in 2015 and numbered 3491 of 5200.

Did I mention as well the proof? 135! Definitely something I was needing to put my cowboy boots on before I drank from it.

Looking at the whiskey in the bottle was difficult – the spirit was so dark as to be barely translucent – a deep mahogany, reminiscent of well-oiled saddles.  Holding the bottle to the light revealed a treat;  if good vinegar has a cloudy  “mother” floating in the bottle, this whiskey definitely has a “father” swirling as visible barrel flavors of charcoal and oak.  The literature accompanying the bottle recommends decanting if you don’t find these pleasurable in the glass.

Pulling the wax covered tab revealed a secondary deerskin leather top under the wax – a nice little detail to remind one of the Cowboy spirit inside.

In the glass: A deep cherrywood color with hundreds of still drops keeping to the ring, never falling.

On the nose: Surprisingly for the proof, there is almost no nose prickle. The aromas of tanned leather, cedar cones and juniper leaf combine with the sweet tang of marmalade and Madagascar vanilla pods.

On the Palate: A warming burn of alcohol is quickly overwhelmed by cereal flavors.  Heavier leather and oaky depth are offset by caramelized dates and grilled pineapple.

The Finish: The medium finish surprises with black plum and buckwheat forward, before lapsing into roasted corn and sun-warmed wood.

With Water: Remarkably smooth for its proof, the water accentuated the oiliness of the spirit, while returning its once rich flavors to a light vanilla, dark plum and oak profile.  Go sparingly, if at all, with water.

Pairing: This bourbon was a perfect accompaniment to my toasted red quinoa and pumpkin pilaf, but requires nothing but a quiet moment to enjoy. With a price point of $159 – $169, better make that a long moment.

All things considered, I give the 2015 Garrison Brothers Cowboy Bourbon a rating of 93 points. Should you want to lasso up a bottle of this beast, you can search for one for sale online through different retailers here.