Garrison Brothers, a bourbon focused distillery out of Texas, has a number of American whiskeys in the stable, be it their flagship expression or speciality releases such as the super high proof Cowboy Bourbon. The line up doesn’t have much of a soft side to it, though that’s changing a bit more now with the 2020 release of a bourbon “with a subtle honey finish” due to being sweetened with 100% Texas-made wildflower honey.

Garrison Brothers HoneyDew, according to those behind it, is a special release that’s “13 years in the making and represents a departure from previous expressions created by the brand. Nancy Garrison, business partner and wife of proprietor Dan Garrison, wanted the distillery to produce a honey-sweetened bourbon whiskey since they started the business together in 2006. 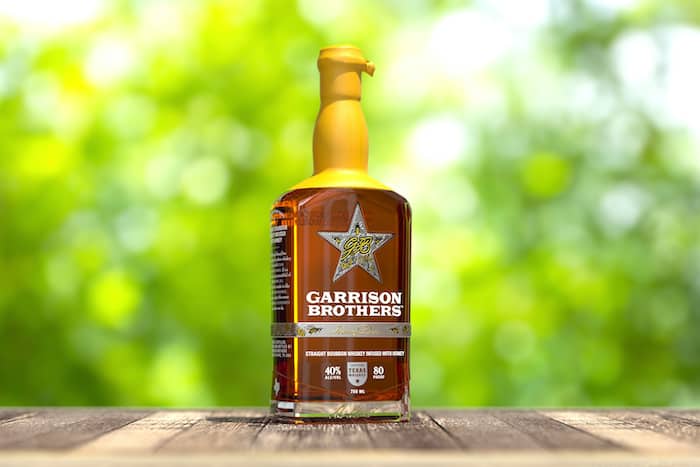 “Dan strongly objected due to his disdain for ‘flavored whiskies,’ hence the name ‘HoneyDew,’ as a play on ‘Honey Do’ requests. Garrison’s objections to flavored whiskies come from the fact that so many are syrupy, chemical concoctions; several even made with propylene glycol.

“Master distiller Donnis Todd emptied 176 four-year-old Garrison Brothers Small Batch Bourbon barrels, coopered by Black Swan Cooperage, into a stainless-steel tank, where the liquid mellowed for seven months. He then decimated all the empty bourbon barrels by sawing them into small wooden cubes. He immersed the cubes in Burleson’s Texas Wildflower Honey.

“The cubes were then infused with more Burleson’s Honey by Matt Albrecht of River Drive Cooperage using a patented technique called Fiber Infusion Technology. Once Todd was satisfied that the cubes had absorbed the honey, he used cheesecloth to contain the cubes and immersed them in the stainless steel tank of bourbon every day for six months.”

“I’ve been drinking bourbon since I was 13 years old,” said Dan Garrison in a prepared statement. “Our HoneyDew is the most magical nectar I have ever tasted. It is light, delicate, gentle, floral, and perfect for sipping on the porch in the summertime. Donnis knocked it out of the park. It deserves to be behind every sophisticated bar in America.”

As it stands now plans call for HoneyDew, bottled at 80 proof and pricing around $90 per 750 ml bottle, to be available year round starting in August. It can be found in “select liquor stores, bars, and restaurants throughout Texas, California, Florida, New York, twenty one other states as well as on military bases where Garrison Brothers is sold.”