To many, including myself, he was the face of the entire craft whiskey boom in America.  I first encountered Gable Erenzo in 2009 at a whiskey festival in New Jersey.  He bounced over to my table in overalls, a T-shirt, a beard, a huge grin and a clipboard.  “Hey, I’m Gable, we’re making whiskey in the Hudson Valley and we’re trying to get New York State government to…..”  I’ve forgotten the issue at hand but it didn’t matter because I didn’t understand any of this at the time: “he’s Who? making whiskey where? and he wants to do what?”.  But he had me at “Hey” and I signed the petition, and we became instant friends, peers and fellow travelers.

In my book “The Complete Whiskey Course” I wrote about the boom in craft spirits: “At whiskey shows around the country, more and more whiskey brands were emerging from untraditional places with whimsical names more suited to craft beers than spirits. Behind their event tables stood scruffy young, bearded guys and tattooed ladies in jeans with an abundance of enthusiasm and strange-looking sample bottles”.

Gable was on my mind when I wrote that.

This was a new age in distilled spirits, small micro-distillers showing up from the four corners of nowhere and taking hold of the drinking public’s imagination.  The distillery that Gable co-founded with his father Ralph Erenzo and co-owner Brian Lee, Tuthilltown Spirits (known especially for Hudson Whiskey), had captured early the imagination of a jaded industry with their squat bottles, tiny barrels and family ethos. No one knew they were about to set the standard of the explosion that was to come.  Leading that charge was Gable, out there with the other brand ambassadors: pouring, pitching, packing up and presenting over and over, city to city, converting each drinker one by one. 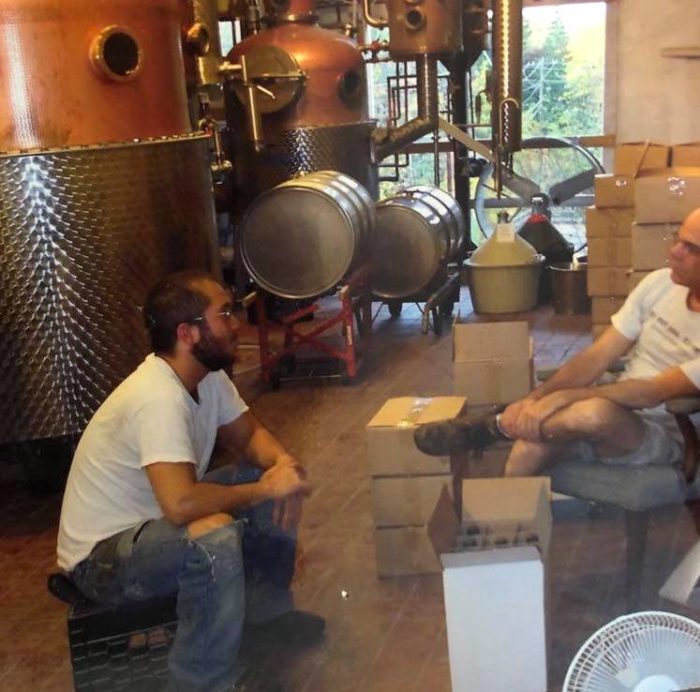 Only he had a special edge: he was also making the stuff back at the distillery, and through this the whiskey world got to know the intimate details of production from a whole new perspective.  If doing this was as much fun as he was, there had to be something to it.  Boom.

And so, through the years, as he and Ralph shepherded the Hudson Whiskey brand from obscurity to national and world renown, Gable Erenzo was the embodiment of this new commercial and social movement, this small craft distilling thing: effervescent, committed, unpretentious, full of joy, more forward passion than backend knowledge and open to learning everything.  And with each meeting, each event and tasting, each visit to the distillery in Gardiner, NY, the same message was played back: this guy’s the real deal, there’s not a fake thing about him.  You pulled closer to him because you felt better in his presence.

“On a winter’s day in 2011, after hearing about him from a mutual friend, Gable and I randomly ended up on bar stools seated next to one another in a beer bar in ATL, one of the largest airports on earth, and struck up a conversation”, says Nicola Riske, Global Ambassador for The Macallan.  “We very quickly put two and two together and realized that we both worked in the whisk(e)y industry and had numerous friends in common. Over the years we became fast friends and when I reflect on these conversations, it’s that Gable was so genuine. He made me feel like family and whenever I would run into him at whisky shows and events, it was like seeing your favorite cousin. Hugs and smiles and that genuine Gable energy.  He had a spirit of gold”.

Gable was the product of his experience. He grew up in a family split between New York City and tiny Mahopac, NY, nestled into the scenic Hudson Valley, where he and Ralph would scale the granite cliffs of the Shawagunk Range, honing the skills of climbing and rappelling these intimidating rocks as a father and son team.  They travelled the US and Europe frequently, broadening his scope, but his seminal learning experiences were shaped by the Walkabout school he attended, where inclusion and trust were melded together with a sense of community and self-awareness.  That may have played a part in shaping him to take on his most important, and little-known role, that of a foster parent. 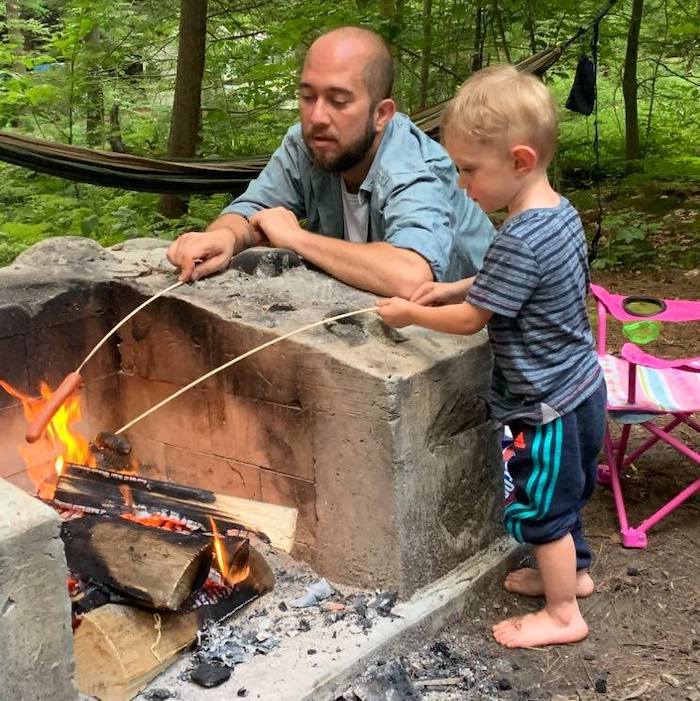 Gable and his adopted son Jesse (image via Ralph Erenzo)

Most new parents come to the job secure that their newborns are born from their loins and spend their progeny’s early years gleaning all the indicators of their DNA heritage: the hair and eye color, the first words and early steps are all part of the family line that creates an unbroken bond with their ancestors.  But adoptive parents, and especially those fostering children, lead with a heart full of love for the child that transcends any certainty of lineage.  To bring an unknown baby into their world, one must be secure with themselves to start anew, to overcome the uncertainty that ancestry mediates.  Fostering a child is a test of humanity and the capacity of love that can bear both the fruit of joy or heartbreak outside of their own nurturing. It carries the additional challenge of falling in love with a child who may go to another family.  This was Gable and his wife Cathy, who fostered a total of 12 children over a period of 4 years. From this, they adopted their son Jesse, now 4, and were in the process of adopting their second child, Alex, two, also fostered from birth.

To see Gable in this role was to affirm everything you thought about him prior.  His grin was broader, his eyes shone and sparkled with an even brighter light.  After the sale of first Hudson Whiskey and later the entire Tuthilltown Distillery to William Grant and Sons, Gable threw his life into growing something new again: along with 2 young children, his Gardiner Mercantile Distillery, a combination distillery, grocery and tasting room now focused on making eau-de-vie brandy from local orchards. It became the toast of the newly burgeoning Hudson Valley community, attracting attention from Albany to New York City. He grew his consulting role with work on a new project, the Hudson House, a converted monastery overlooking his beloved Hudson River, that is shaping up as an event space, distillery and boutique hotel.  He was in his element: husband, father, entrepreneur and seasoned veteran of the whiskey revival.

The outpouring of grief and love from those in the industry upon learning of his untimely death at age 41 is a direct response to the love that Gable spread out with every interaction, every hello, every sample poured, every drink shared.  Paul Hletko, the founder of FEW Spirits and fellow traveler in the world of start-ups, remembers him this way: “…when we were starting up, he was a larger-than-life figure. First time I met him, I was nervous as hell! I mean, who wouldn’t be? He’s Gable effing Erenzo! But then, he’s the most down to earth, friendly, not an ounce of BS guy and we finish with a bear hug and a “hey, want to share some whiskey”. Another time, we were at Tales of the Cocktail at the Wm Grant party, post-sale, and he and I just pulled aside from the insanity and had a quiet drink in the midst of the mayhem. Here’s a guy at his corporate bash at Tales, and he chooses to spend some quiet moments chatting with me…” 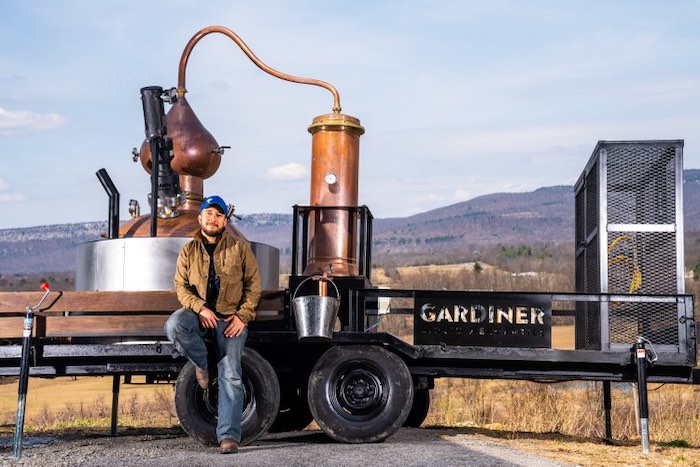 From the world of science, we learn that energy is never lost, just dispersed to other areas.  Gable Erenzo had an energy, a life force, that was bigger than his own heart, a force that will transcend the boundaries of his time and his impact on the small world of craft spirits.  His energy and love live in the heart of his mother and father, his wife Cathy, his two sons, and everyone who had the opportunity to come into contact with him, to know him, to share a drink or a post-event laugh.  Paul Hletko said it best: “Gable – you are missed more than you can ever know, and I hope you know how many of us out here wish we can become half the man and half the father you are”.

May his energy rest in power and peace in our hearts forever.