Fred Noe Looks Back on 25 Years of Knob Creek

What a difference a quarter-century makes when you’re in the bourbon business. Back in 1992, Jim Beam launched Knob Creek, one of four small batch releases created by then-master distiller, Booker Noe, to mimic higher-proof, complex flavored pre-Prohibition whiskeys.

Problem was, bourbon wasn’t selling well back then, especially compared to its heyday in the 1960s and its resurgence in the new millennia. So while it took guts for Jim Beam leadership to bet that Noe was right, at least there was plenty of aged stock around to let him prove his hunch.

“My father was saying we should let it lay it back and go with those tastes,” said current master distiller, Fred Noe, III. “He utilized some of the products that were already in the barrel. He knew those were good.”

In 2017, Knob Creek is Beam’s top small batch seller by a wide margin and celebrating its silver anniversary with a barrel strength release (click here for our review). Current bottlings average 125 proof, which is 25 higher than its base offering and five proof higher than its standard private bottling. Noe said that proofs could even edge higher if those barrels’ flavors fit his profile. 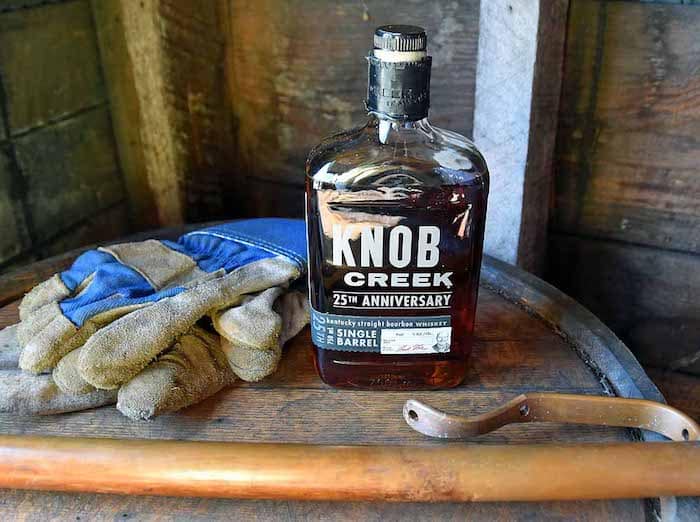 “I said that if we were going to do this, we need to do it right,” Noe said, gesturing toward 16 barrels lined up for a morning thieving in late June. “Knob Creek fans like bigger, bolder flavors, so we’re going to go big and bold with the Knob Creek distillate we have stored here.”

A barrel-strength Knob Creek leads one to wonder whether Booker Noe would approve were he still alive. As the man who had the final world on Beam maturate until his death in 2004, Booker wouldn’t allow single barrels, regardless of the success of Blanton’s, Russell’s Reserve and Elijah Craig at competing distilleries. He placed a higher premium on flavor consistency than uniqueness, so all its bourbon was mingled.

But as Fred Noe picked up where his father left off, traveling the globe and preaching the good news of powerful, flavor-packed bourbon, fans kept asking him, “‘Why aren’t you doing a single barrel?’ It didn’t matter to Dad that Elmer T. (Lee) was doing Blanton’s. But when I heard it again and again from all over the country, it made me think we needed to do a single barrel.”

Today Jim Beam needs millions of barrels, both in aging and bottling, to keep pace with demand. In addition to multiple rickhouses under construction, Noe said changes are underway at Beam’s Clermont and Boston, Kentucky, distilleries.  Boston’s Booker Noe Plant is not running at full capacity, so there’s room to grow. But at Clermont, he said a three-week shutdown will see a trio of 45,000-gallon fermenters added this summer to boost output.

“Freddie’s fermentation manager at the (Clermont) distillery, and he thinks we can tweak some things to increase yield,” Noe said of his son, officially known as Fredrick Booker Noe, IV. “Then, when you make more whiskey, you’ve got to have a place to fill the barrels and store them.”

He views the stress of the Clermont plant’s growth as a good test for Freddie, who’s started the slow climb to replace his father as master distiller.

“I think this’ll be an interesting experiment for my son,” he said. “He’s stressed a little bit right now, but for a young guy, that’s good. If it was me, I’d probably be going nuts.”

Before long, Freddie will hit the road to promote bourbon like his grandfather did 30 years ago. But he’ll enjoy far better receptions his grandfather initially. A tiny turnout encountered on a trip to Miami decades ago sticks out among Fred’s recollections of his dad’s countless road trips.

“Seven people showed up, and five of them were on the (Beam) payroll,” Fred Noe recalled. “When it was my turn to go back to Miami, he said, ‘I hope you do better than I did, boy.’”

He did, for by that time, bourbon’s resurrection was underway, and Noe was greeted by a crowd of 200.

“That just shows you the snowball effect of what had started to happen,” he said. “Dad believed that if you just get the bourbon into people’s mouths, they’ll enjoy it.”

His father also believed people would prefer bourbon sold at pre-Prohibition barrel strength. Booker Noe knew well the stories of the “Quart House,” a rickhouse at the Clermont distillery where customers brought containers of any size for filling straight from the barrel.

“It might have been a bucket or a jar, whatever, and they’d charge 50 cents a quart,” Fred Noe said. “Dad found some old ledgers in Jim Beam’s house that showed that a guy bought 2 quarts of Old Tub and paid $1. Some even got the whiskey on credit.”

Booker’s conviction that drinkers wanted bolder flavors led to the creation of his namesake whiskey (128 proof), Knob Creek (100 proof) and Baker’s (107 proof). Basil Hayden’s, the fourth in the series, is a spicy, high-rye bourbon, but comparatively low-proof at 80. At tastings done decades ago, Noe said he assumed women would choose Basil Hayden’s instead of higher-proof expressions. But over time, he’s learned that’s mostly misguided thinking.

“The worst thing you can do is look at a petit lady and try to steer her toward Basil Hayden’s, and she says, ‘What do you mean? I drink Booker’s neat!’” Noe said. “I’ve learned to not even go there anymore.” Doubtless, bourbon was “a guys’ club for the longest time,” Noe adds, and many women did push their tasting glasses filled with high octane liquor toward their male counterparts at tastings.

“But especially on the Bourbon Trail … you see as many bachelorette parties coming to the (Jim Beam) Stillhouse as you do bachelors partying before they get married,” he said. “Girls like bourbon, too, and everybody in the industry loves it.”

Of the four small batch bourbons, Noe credits Knob Creek’s growth to the massive marketing investment in it by Beam. Now, its still-surging momentum is happening via mixologists who love Knob Creek’s complexity and high proof, elements that stand up to dilution and give their cocktails backbone. While many come to bourbon by sipping it neat, he said cocktails continue to ease people into drinking it, especially if their initial impressions of bourbon were bad.

“For a lot of people, the way they first saw bourbon was out of the bottle at a ballgame or a party, and if it didn’t agree with them, they didn’t touch it again,” he said. But in a well-made cocktail, flavor elements outside of the whiskey make the reintroduction a bit gentler. “They think, ‘Wow, this is a lot better than that liquor I was drinking at the tailgate.’ Mixology is an easy way to bring people in.”