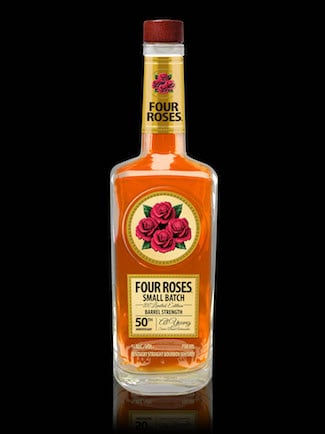 If you’ve been to Four Roses in Kentucky in oh, say, any time in recent modern history, you’ve likely met Al Young. He has served in a variety of capacities at this distillery in the 50 years of his career there, ranging from distillery manager to brand ambassador to historian. Now a special bourbon is being released in his honor, and it definitely is worthy of his legendary status.

The new 2017 Limited Edition 50th Anniversary Small Batch Bourbon, according to Four Roses, was developed by Young and master distiller Brent Elliott side by side as they picked four of the distillery’s 10 unique bourbon recipes for this release. What you end up with is “5 percent of a 23-year-old selection of Four Roses’ OBSV recipe (featuring a delicate fruitiness, with a hint of spice and creamy vanilla and caramel), 25 percent 15-year-old OBSK (full-bodied, light spice, caramel), 50 percent 13-year-old OESV (light, creamy, fruity) and 20 percent 12-year-old OBSF (herbal, full-bodied).”

The bottle which is hosting this amazing offering is designed in a retro bottle shape and label, modeled after the bottle design from 1967, the year Young started with the company.

“After 50 wonderful years with Four Roses, I am honored to be recognized with my own bottling of the Bourbon that I love so dearly,” said Young in a prepared statement. “It is surreal seeing how the brand has grown during my years here and I am proud to have played even a small part in its continued success.”

“After he’s spent half a century handcrafting our product and guiding the Four Roses brand, Al’s 50th Anniversary Bourbon had to be as memorable as the man himself,” added Elliott. “He wanted to utilize an older Bourbon, if possible. We tried different quantities of the 23-year-old and the chosen 5 percent was just the right amount. It mingled with the other recipes perfectly for an incredible flavor.”

Approximately 10,000 bottles of this are slated to be released in June, with no official price mentioned as of yet. Official limited tasting notes are available, however, and they suggest this bourbon “exhibits aromas of sweet caramel and floral honeysuckle. The palate offers flavors of fresh peaches and apricots, encompassing a luxurious and warm fig and rich oak, finishing with a hint of mint.”