Flaviar, as subscription liquor services goes, tries to be as much of a one stop shop as it can for the types of spirits it offers its members for sale online. This entails offering occasional private label bottlings, such as the Son of Peat we wrote about last year. They now have a blended bourbon to add to the roster that’s drawn from a number of American craft whiskey distilleries.

The new Corn Trooper 2020 United Craft Bourbon, according to those behind it, brings into one bottle the bourbons of seven different brands. As Flaviar describes it, “OOLA from Seattle brings high corn content, while Hartfield from Kentucky swears by more malted barley. If you ask Kings County, they go all-in with New York corn (80%). Rapid maturation under the hot Texan sun forged Balcones Bourbon, whilst Breckenridge makes their Bourbon at 2 miles above sea level. To round the posse out, we added a Bourbon finished in beer barrels from New Holland Brewing.” 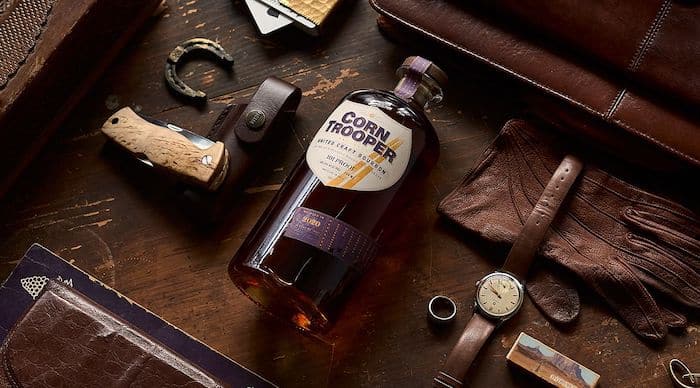 “Corn Trooper is a union of our favorite craft bourbons from all around the U.S. coming together for the first time,” said Grisa Soba, co-founder of Flaviar and master blender of Corn Trooper, in a prepared statement. “For us, it’s as much an incredible whiskey as it is a map of memories and America itself.

“When we first started this project we were simply looking for great quality juice but it developed into something much bigger than thatIt’s a pretty big deal for us to get craft producers to collaborate openly on a project like this, but in the current climate, where times are tougher than ever for craft distillers, it is even more important that the industry unites and we do what we can to shine a light on these incredible liquids and hero these smaller producers.”

Corn Trooper is noted as being a 100% straight bourbon, with ages ranging from 2 to 12 years in the mix. It is a 101 proof offering, being bottled in 750 ml bottles. Pricing is set at $65 for Flaviar members (non-members pay a little more). This whiskey, which took over three years to bring together, has official tasting notes that start with “a powerful nose with notes of maple syrup, oak, vanilla, banana, and green olive underlined by a spicy character of cinnamon, ginger, orange peel, dark cherry, and apple peel, all translating perfectly to the palate.”