When one looks across the US in search of a region besides Kentucky where a lot of potentially great whiskey is being produced, Texas tends to bubble up to the top. This emerging craft whiskey powerhouse of a state has the likes of Ranger Creek, Balcones and Garrison Brothers already, among others, and now Firestone & Robertson Distilling out of Fort Worth is joining the mix with their uniquely Lone Star State spin on bourbon.

The Firestone & Robertson TX Straight Bourbon, according to the distillery, is set to be released in its first batch this coming weekend at their location as well as in regional stores. It is a little under five years old and, as mentioned a moment ago, this is pretty much straight up a Texas born and bred whiskey, having a mash bill which consists of #2 yellow dent Texas corn, Texas soft red winter wheat, and a 6-row distillers malt. What is perhaps most interesting about it though is that it was influenced by a proprietary strain of yeast said to have been captured “from a Texas pecan.” 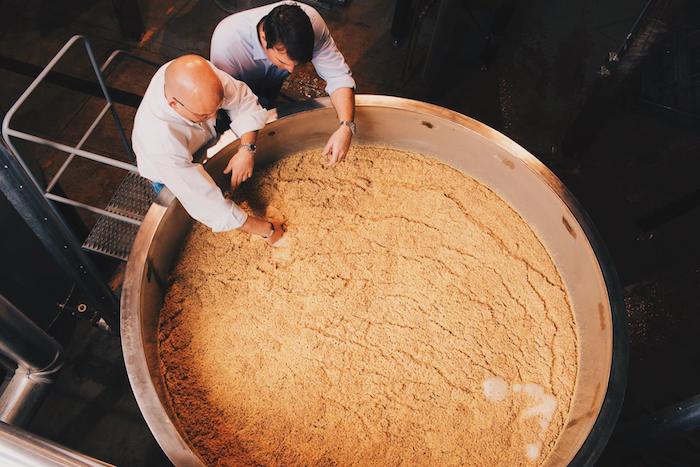 Yeast is used normally by distillers during the fermentation process to get things kicking. Firestone & Robertson said it does this as well, but in apparently looking for something uniquely Texas, their head distiller Rob Arnold, in the distillery’s own words,

collected a number of different samples (fruits, nuts, and soils) all from North Texas. Each individual sample was placed into a special, proprietary liquid media that encouraged the growth of alcohol tolerant yeast. After 3-10 days of growth, Rob isolated the yeast growing in the liquid media onto a solid media. Using this method, about 100 different yeast were isolated. With these isolates, Rob then had to determine which were of the S. cerevisiae species. Using the polymerase chain reaction (PCR) and DNA sequencing, he was able to identify 15 isolates within the original 100 that were S. cerevisiae. With these 15, he had to identify which, if any, were suitable for the fermentation of a bourbon mash. Employing small-scale fermentations, attenuation/flocculation analysis, and selection studies, Rob identified 5 of the 15 S. cerevisiae isolates that possessed the required ability to thrive and ferment in a bourbon mash. From here, it was all about flavor.

Rob, Leonard, and Troy employed sensory analysis to determine which of the 5 strains possessed the desired flavor and aroma characteristics we wanted for our bourbon. Namely, we wanted a strain that produced a variety of fruity, spicy, and floral notes, yet lacked any earthy or sulphury notes (common with some wild yeast). We identified a strain from the 5 that fit perfectly with the desired profile. And as fate would have it, this strain was captured from a pecan tree nut in Glen Rose, Texas. With pecan being the state tree of Texas, we couldn’t be happier with our proprietary yeast strain. His scientific name is RHB-422, but we like to call him by his nickname – Brazos.

There’s a lot more behind this upcoming bourbon worth reading about over at the distillery’s website – in fact, this is probably one of the more detailed and open faced explanations of a whiskey being made we’ve read in awhile. As for this release, it will drop for about $50. It follows on the heels of their TX Blended Whiskey from a few years back, and you’ll find official tasting notes for it at the end of this story.

“Admittedly, there were times in the past few years when we grew impatient, but we are so happy that we waited,” said Leonard Firestone, co-founder of F&R, in a prepared statement. “We believe our team has produced something special. The final product has certainly achieved all our goals. The bourbon has a beautiful aroma. It’s smooth. It’s balanced. And on the palate, it reveals classic bourbon characteristics but clearly possesses its own personality. We can¹t wait to share it.”

In the glass, TX Straight Bourbon is a dark amber color – an indicator of the effect the hot Texas climate has had after years of aging in oak barrels. Upon swirling, long and slow legs showcase the spirit’s brilliant viscosity. At bottle strength, the nose is very bold with aromas of rich oak, caramel, cinnamon and allspice. Using a few drops of water for dilution, dark dried fruit, coconut, toasted almonds, and more sweet spice fragrances radiate in the glass.

On the palate, the velvety, mouth-coating sensation of the bourbon, along with its supreme drinkability, becomes apparent. The aromas carry through on the taste and provide a lingering finish.