Who Exactly Was Pappy Van Winkle? 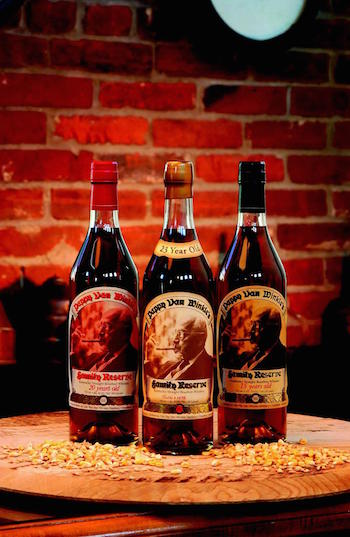 Editor’s Note: A previous version of this story ran a photo we believed was of Julian P. “Pappy” Van Winkle, Sr., but information has come to light that may not be the case. The Whiskey Wash regrets the error.

Have you ever wondered who the man is that stares back at you from a bottle of Pappy Van Winkle bourbon? To answer that, we take you on a brief history of the Van Winkle family and its ties to whiskey.

Julian P. “Pappy” Van Winkle, Sr., got into the bourbon business almost by accident.  He was looking for a job and W.L. Weller and Sons was hiring.  He began his career in sales, eventually buying the business with fellow Weller employee Alex T. Farnsley.

Initially Farnsley and Van Winkle continued the business as non-distilling producers.  They bought most of their whiskey from Arthur Phillips Stitzel’s distillery on Story Avenue in Louisville, Kentucky.  A. Ph. Stitzel Distillery was one of only six Kentucky distilleries allowed to remain open during Prohibition, and because Farnsley and Van Winkle had developed such a good relationship with Stitzel, they became the vice president and secretary of the treasury, respectively, for the distillery during that time.

The power structure for the W.L. Weller business was also similar: Van Winkle was the president, Farnsley was the vice president and the secretary of the treasury was Stitzel.  They sold whiskey to pharmacies, some of which they sold on behalf of distilleries that didn’t have a license to sell alcohol.

When Prohibition was repealed on December 5, 1933, most of Kentucky’s bourbon business had been left in ruins.  Van Winkle and Farnsley’s W.L. Weller brand merged with Stitzel’s distilling business and they began construction on the Stitzel-Weller distillery in Shively, Kentucky.  The new distillery opened on Derby Day 1935, producing brands such as Old Fitzgerald and Cabin Still.

Upon opening up, they were still reeling from diminished supply caused by the severe limitations of Prohibition.  They released a brand called “Carolina Club” that was aged for three months.  A few months later they released a six month old version, and then followed that with subsequent nine month, one year old and two year old versions.  Once they had rebuilt their whiskey stocks, they did away with the brand.  This is the only time in history there was a true bourbon shortage.  It was also during this time at Stitzel-Weller they developed a wheated bourbon recipe because they thought it tasted better at a younger age.

Van Winkle was never a distiller and he never had a bourbon named after him in his lifetime.  The family had to sell the distillery shortly after Pappy’s death, but Pappy’s grandson,Julian P.  Van Winkle III, finally convinced his father Julian P. Van Winkle, Jr., to market a bourbon with Pappy’s name on it several years later. .  Pappy Van Winkle himself was known to drink Old Fitzgerald Bottled in Bond during his lifetime.

The family business today, even though the distilling for its bourbon these days is contracted out to Buffalo Trace “under the same strict guidelines the family has always followed in order to produce a superior quality product,” continues into the next generation, with Julian III’s son Preston Van Winkle with him at the helm and his daughters Carrie Van Winkle Greener, Chenault Van Winkle James and Louise Van Winkle Breen running a related bourbon lifestyle company.