Today, bottled bourbon, complete with carefully designed labels and sophisticated marketing campaigns, is so commonplace it hardly warrants a second thought. Yet that innovation – branded, bottled bourbon – is actually a relatively new one, and early entrants to the market had an intuitive understanding of what motivated spirits consumers to pick one bottle over another.

It was 1840, and bourbon was on the move. The hallmarks of modern bourbon were starting to coalesce, but it would be a century before bourbon completed its gestation into its current standard of product identity. Laws stipulating a minimum of 51% corn were enacted May 13th, 1935, and storage in new charred white oak barrels was required from March 1st, 1938. These were the finishing touches – the collaboration of politics and industry to regulate the quality of modern bourbon whiskey.

During the 1840s commercial distilleries were beginning to be built, with larger capacity and greater efficiency using steam power and new technology. Many were employing three-chambered wood stills. Processes were advancing with better sanitation, higher yielding yeasts, set-backing to manage bacteria and pH, and more intentional approaches to maturation. ‘Old’ bourbon now denoted whiskey that had spent two to four years in oak, assuming the whiskey was not rectified and adulterated to appear as bourbon. That’s because a flourishing rectifying industry was flavoring, sweetening and coloring purified spirit to resemble bourbon. Until the 1905 Pure Food & Drug Act, some bourbon could be made from molasses. Most bourbon brands were rectified grain ethanol, blended with bourbon or fabricated with coloring agents (burnt sugar), flavorings and chemical additives to imitate whiskey’s character.

At the same time, bourbon was also starting to supplant rye whiskey. Ohio’s corn-based whiskey had supplanted Pennsylvania rye-based whiskey as the leading whiskey style of the day. Even in Pennsylvania, most of the whiskey was increasingly made with corn and labelled rye. In 1845, Ohio was the “grand center” for whiskey, distilling 14.5 million gallons, of which nine million was rectified through massive charcoal filtration systems in Cincinnati, called patent bourbon.

In 1840, the western States (well, western at the time – west of the Appalachian mountains) were producing one-third of America’s spirits. Kentucky contributed 4% with its 1,425 distilleries, yet the state was becoming known as the home of bourbon. Louisville too was rising as one of whiskey’s major rectification centers along with Philadelphia, Baltimore and Cincinnati. While Kentucky may not have been where the bourbon recipe originated, it was where this corn-dominated whiskey found great fame. Consumers too were seeking high-proof, sweeter, mellow tasting spirit, just what bourbon could deliver. Demand was fueled as the U.S. population increased by 25% each decade, and per capita consumption of spirits was 2.1 gallons – half the volume of today. Consumer whiskey marketing was also about to excel with a brilliance rarely matched by today’s best modern brand marketing practices.

It was during this formative period the first bottled brand of Kentucky bourbon debuted in 1849. Within a decade, at least a dozen bottled bourbon brands were on the market, including exports to England and Australia. Many of these early bottled bourbons were manufactured in Kentucky, a signifier of the whiskey’s quality.

Bursting onto this primordial bourbon scene was Abraham Bininger. The family emigrated from Zurich settling in South Carolina in 1735. They acquired a New York City grocery store in 1778 expanding into a grocery chain and wholesaling business. By the 1840s A. M. Bininger & Co. entered into wine and spirits wholesaling, selling bottles of Bininger Cognac and Old London Dock gin. In 1849 they added Bininger’s Old Kentucky Bourbon Reserve 1849, distilled in 1848. Unlike early bulk or barrel bourbon brands, such as Old Joe’s from Joseph Peyton’s Kentucky distillery circa 1818, this was the first bottled brand of bourbon. Their advertising claimed it was not rectified and promised to cure ‘lung complaints, dyspepsia, derangement of the stomach, nervousness, etc.’ – a case of bourbon as medicine. 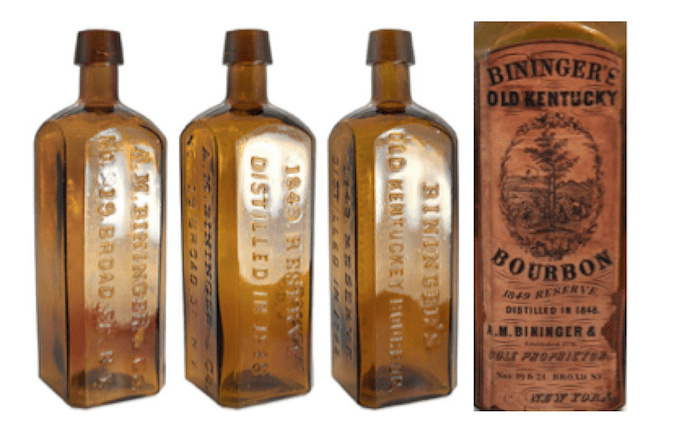 In 1858, the brand received a glamorous revamp. Adding to Binninger’s Old Kentucky Bourbon square medicinal gin bottle, they customized a new range of shaped glass bottles as barrels, canons, and hip flasks called pocket bottles. They also designed new four-color lithographic labels depicting evocative images which positioned each bourbon towards a different audience. The bottled bourbon competition was starting to become a branding race to attract attention. The original wholesome, Old Kentucky Bourbon 1849 Reserve joined the sensual and romantic designed Bouquet Bourbon. The famous Parisian ballet became La Sylphide Bourbon. American frontier archetypes were evident with Pioneer and Traveller’s Guide Bourbons. And there was the foreign exoticism of Zouave Bourbon, depicting French Algerian soldiers. In the modern parlance, they had created the first brand portfolio targeting audiences including women, discerning drinkers, manly outdoorsman and presumably the urban dandy too. In 1863 they added Golden Crest Bourbon. In the 1860s, Bininger’s bourbons were sold at leading grocers and druggists south to Georgia, north to Vermont, across to Michigan and west to Oregon. Modern, national bourbon branding had arrived with panache and imagination.

In addition to traditional bourbon, they launched a wheated bourbon, Essence of Virginia in 1859. From Pennsylvania came Bininger’s Monongahela Rye, as well as Old Times Family Rye and Old Homestead Rye bolstering their whiskey portfolio. Amongst these spirits brands, they had an Old Rip Van Winkle gin. 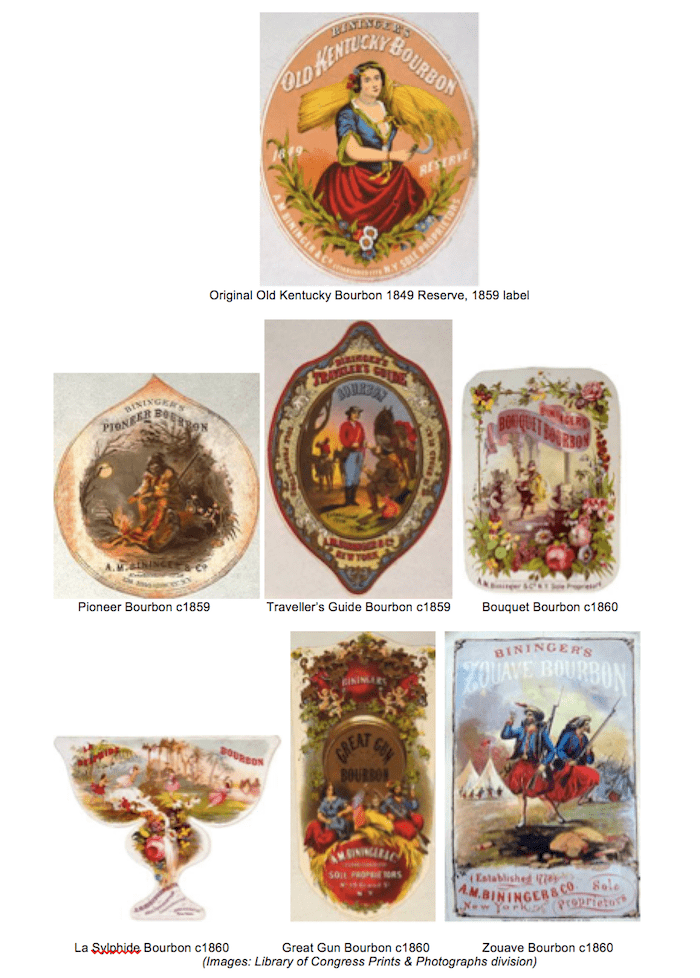 The Format Catches On

Another notable early bottled bourbon brand was Monk’s Old Bourbon in Boston, sold by the druggists Wilson Fairbanks & Co on Hanover Street from 1856. This medicinal bourbon remained on the market for over a decade and enjoyed product quality testimonials from the State Assayer’s Offices in Boston and New York. Not until 1916 did the U.S. Pharmacopeia strike whiskey off its list of prescribed medicines. 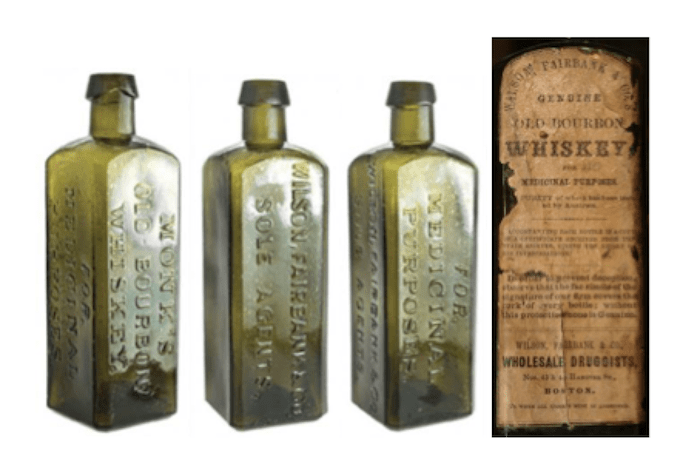 Monk’s Old Bourbon Whiskey by Wilson, Fairbanks & Co ‘For Medicinal Purposes’. Paper label or ‘wrapper’ on bottle circa 1857, possibly the only existing bourbon label from the 1850s.(Image: Peachridge Glass)

The enterprising Udulpho Wolfe began selling Wolfe’s Pure Bottled Bourbon in 1863 in New York. This Kentucky bourbon sourced from a Louisville agent was distilled by ‘two of the largest and oldest distillers in Kentucky’. Born in Richmond Virginia, he was involved in the Hamburg gin distillery before returning to New York where he formed Wolfe & Co with his brother in 1826. He contracted the Blankenheymo & Nolet Distillers in Schiedam to produce his Aromatic Schiedam Schnapps from 1848, using his special recipe based on malted barley and Italian juniper. The 1906 Pure Food and Drug Act brought this, and many spirit brands posing as therapeutic or medicinal tonics, to an abrupt commercial end.

By the 1860s, bourbon branding had blazed onto the consumer landscape as the most sophisticated and persuasive in packaging innovation and labelling design. In its way, bourbon heralded the modern age of consumer marketing.